He said that he would no longer address the media and he wanted to focus on eradicating poverty in Mvezo. 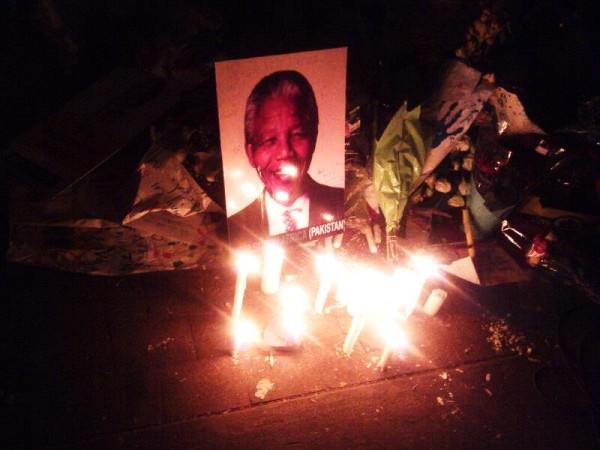 Former President Nelson Mandela is doing well at his home in Houghton Johannesburg.sabcdigitalnews
"Madiba is doing well, he was smiling and shaking hands with everyone. He’s up and about…"-Zuma. Which Madiba was JZ talking about?Thabiso TT Tema
"Mandela looks well and relaxed"No, he doesn’t look well and he definitely doesn’t look relaxed @SABCNewsOnlineKenichi Serino
The video was broadcast exclusively on SABC News and they ran with the footage yesterday. The footage was met with outrage on Twitter and Facebook.
I cringe at this #Madiba video. Shameful. And the idiot using camera flash. Madiba has always hated it. No flash! SMHBarry Bateman
Tasteless, tacky and totally shameless. #ANC visit with #Madiba – and yet the ANC has the gall to criticise the media about respecting him.Debora Patta
Why is the #ANC #Zuma using #Mandela for their marketing cant they just leave #Madiba aloneThato Buck
Finally saw this Mandela video and I feel ill and disgusted. The ANC and SABC should be ashamed of themselves.Andy
How the ANC continues to use tata Mandela for propaganda and feel no shame especially in his current health condition is seriously beyond me. Poor tata Mandela was static, while Zuma and that reporter were going on about how high spirited he is. Why does tata Mandela’s family allow these people to do this? YHO I’M DISGUSTEDBuhle Nkonki
Mandela survived 27 years in prison only to become a prisoner of the ANC marketing machine.Trevor Noah
Public should know that @eNCAnews and most major news companies have drawn up a code of conduct on reporting on #Mandela Gvt has ignored itPatrick Conroy
Other social networkers however, were on the opposite end of the spectrum and welcomed the footage of Mandela.
am so hppy to c the latest pic of our former PRESIDENT Rhlihlahla Mandela taken ysterday with Jacob Zuma,Baleka Mbethe and Cyril Ramaphosa his looking gud abanye bebesele bexoka read tht info on Cape times molweni banganeMthuthuzeli Mati
Thankyou SABC for giving us a visit to see Nelson Mandela voices.news24.com/esethu-hasane/…ANC YOUTH VOICES
The visit by the National Office Bearers of Tata #Mandela was in line with the accepted norms of Ubuntu that we value our elderly…#ANCDavid Nathi Shabangu
If you don’t want to see #Mandela don’t look….Ndoomesaw

ANC Spokesperson, Jackson Mthembu responded by saying: “Those who are complaining that Madiba’s latest images [were] a publicity stunt by the [African National Congress] are eating sour grapes…. We are happy we shared Madiba with the world, even in his frail state.”

Other users were less incensed than most.
So Madiba must look 25 and Zuma was suppose to say he is about to die, some people think they know too much..fb e sentse batho any nut can make noise!!Kagelelo Banks Kentse
Will everyone stop going on how frail & unwell Nelson Mandela looks he’s 94 years old for gods sake & has been ill #sillycommentsSarah Jane Stanley
Sometimes I feel like SA is scared they’re going to lose their spot in the global guest-list if Mandela had to pass away..Lungelo Dlamini