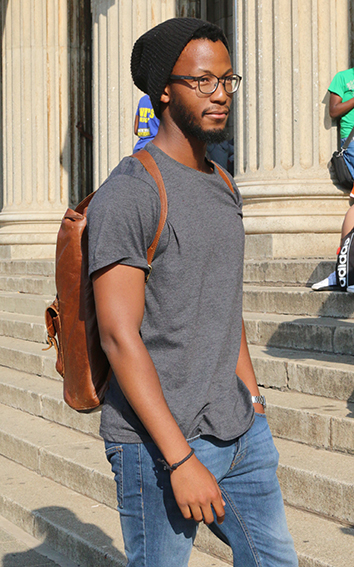 Titus Masike just completed his BSc Nuclear Sciences and Engineering degree and is now studying Industrial Engineering. He is a model with Boss Model Management and plays the guitar when he isn’t on the runway or in class.

How did you start modelling?
I started last year around August/September. My friend Fuaad introduced me to Adrian Abrahams (photographer) and suggested I take some test photos with him. So I did and Adrian liked my photos and as a result he sent them through to Boss and other modelling agencies. Boss were the first to respond and they wanted to sign me up.

Does being a male model mean you get girls easily?
[Laughs] I don’t know. I don’t even know what that means because I don’t really pay much attention to all of that. Honestly, you’re asking the wrong person, I have a girlfriend and “Hi, I’m Titus” is what I consider a pick-up line.

Is modelling hard?
I wouldn’t say that, the act of modelling itself isn’t hard. But getting booked is the hardest part. I think I’m lucky more than anything. The bearded look seems to be in.

What’s the last thing you ate?
A chicken sandwich.

What is your favourite song right now?
It would have to be a song by Dawn Golden – Discoloration.

What is your favourite accessory?
Bags. Leather bags are a good accessory. I also like watches and a whole lot of other things like spectacles.

What are your tips for the runway?
When you walk make sure you keep your feet straight, so you don’t look like a clown.

What is your gym regime?
I go four or five times a week and I do martial arts at Wits.

Who is the most interesting person you have worked with?
Khanyi Mbau at the Jet summer fashion show. She’s actually really sweet.