Complexions of a young black girl 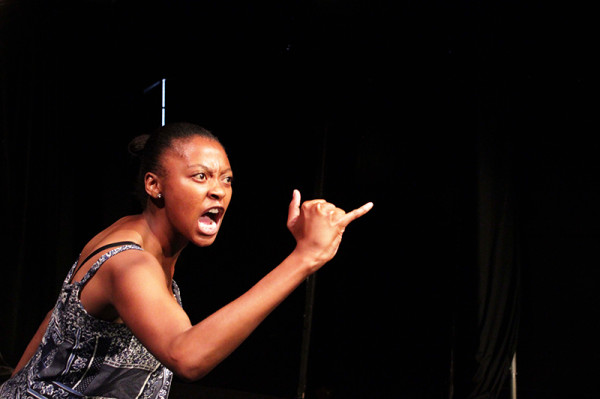 Nothing in Mbali Malinga’s one woman show was over-the-top, despite obvious parallels that could be drawn between this Bildungsroman gone wrong and the infamous television show Yizo Yizo.

The stage of the Wits Nunnery where Complexion played this Monday was completely bare, except for assorted pairs of shoes –stiletto heels, pumps and sneakers – hanging from the low ceiling.

No music. No props. Basic lighting.

But unlike Yizo Yizo, this production swaps gratuity for subtlety to achieve a similarly chilling effect: of the starkness and troubles of growing up poor in South Africa’s townships.

At the end of play, which lasted a swift half hour, you understood why nothing but Malinga and the raucous rabble of characters she brought with her could fit on to the stage, and only just.

“I played 15 characters. A lot of my personal experiences went into it, as well as a lot of research. I needed to understand how these characters are,” Malinga explained after the show, which she developed and wrote herself, over a seven month period. Complexion evolved from a six minute performance Malinga prepared for her 4th year exams.

[pullquote align=”right”]“This is the story of a girl who is made by the home she comes from.”[/pullquote]

Almost typical, but not quite. Rather than dwell on those familiar stereotypes of township life, which she portrays with bewitching verisimilitude  to the small crowds’ pleasure, Malinga shifts quickly between successive growth phases of womanhood, and consequently from one stereotype to the next, with a succinctness and intensity that denies her audience the luxury of forming simple, emotional reactions to what they are seeing..

More than the wrongs of eKasi

The result is a sharp, darkly collage of provoking vignettes that achieve what Malinga confessed she could not in the six-minute version of the play.

“At first, I was just trying to get that eKasi life out … it was an angry piece that just said this is wrong, this is wrong!”

But after grappling with the physical aspects of the play with movement guru Craig Morris, and taking advice from the unexpectedly “very honest, tough crowd” at the Hillbrow Children’s Theatre, Malinga was able to carve out a simple, powerful story she is proud of.

“This is the story of a girl who is made by the home she comes from.”