Where there is hope …

A book review of Dare we hope? by Pumla Gobodo-Madikizela. 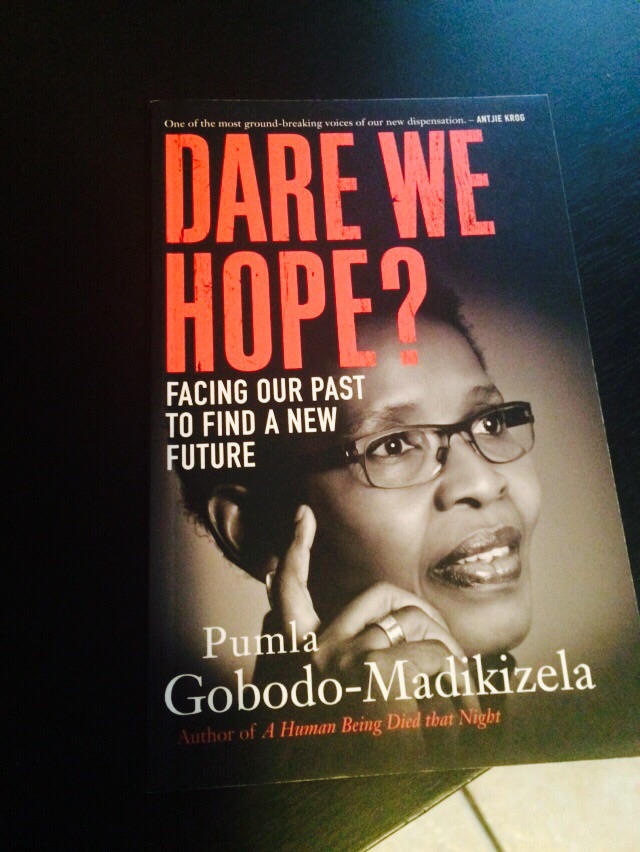 TO A NEW FUTURE: Dare we hope? by Pumla Gobodo-Madikizela is a collection of her work published in local and international newspapers. Photo: Sibongile Machika

World renowned clinical psychologist Pumla Gobodo-Madikizela is an international expert on reconciliation. Having worked on South Africa’s TRC (Truth and Reconciliation Commission), she is often the go-to person  on topics that interrogate the challenges faced by South Africa’s young democracy.

Dare We Hope is a collection of her articles published in The Washington Post, New York Times and various South African publications between 1995 and 2014.

This selection of work confronts issues like Afrikaner rage, the politics of revenge, racism and the ruling party’s ever decaying sense of morality.

The subtitle of the book “Facing our past to find our future”, sums up Gobodo-Madikizela’s intentions. Through her work Gobodo-Madikizela shows how South Africans have found glimmers of hope in potentially catastrophic events like the murder of Chris Hani and the 2002 Boeremag bombing of the Soweto railway. She believes that it is this ability to find hope where there seems  to be none that can help dig South Africa out of its current pit of corruption, reoccurring race issues and economic divide.

Some of the key themes and concepts addressed in the book are: individual sense humanity, understanding the other and the psychological effects of that apartheid had and still has on both the oppressors and oppressed.

Gobodo-Madikizela does well bringing a fresh perspective to these perennial topics. In one of her articles she writes, “Many white South Africans … find it difficult to acknowledge the social, educational and economical privileges under apartheid gave them a better life, and also created the possibility of a better future for them in the post-apartheid era”.

She adds that “acknowledging that they have benefited from a system that oppressed fellow human beings and even committed atrocities, threatens white people’s sense of humanity”.

Engage in dialogue and debates

Gobodo-Madikizela also deals with the current government’s corruption, abuse of power and failing leadership. She explored how the nation’s growing disappointment with the liberation party affects our present and future, from Thabo Mbeki’s HIV/AIDS denialism saga, Jacob Zuma’s rape trial and the African National Congress’s (ANC) women’s dangerously fierce alliance to Zuma.  The book allows the reader to deal with the current state of affairs and begin to imagine the kind of future they might lead us to.

Dare we hope? poses more questions than answers, Gobodo-Madikizela calls on South Africans to  engage in dialogue and debates that seeking first the truth and acknowledgement of our past and its effects  in the hope that it is this truth that will bring us to real forgiveness and lasting reconciliation.  The selection below highlights this notion.

“A starting point would be to acknowledge, instead of deny, that ten years of a change of law will not result in an automatic change attitudes, and that racism [amongst other things] will continue to seep − in subtle and not-so-subtle ways− into our new democracy. As we think about how to move this debate forward, we should focus on the psychological legacy of apartheid racism –the experience of white privilege while other racial groups were excluded from economic, educational, and occupational opportunities, which instilled a sense of superiority in the minds of many of our white compatriots. We should also not lose sight of the long-term effects of a system that strategically instilled inferiority by closing the door of opportunity to blacks.”

Dare we hope? Facing our past to find a new future is available from all leading book retailers.