A day in the shoes of a Witsie 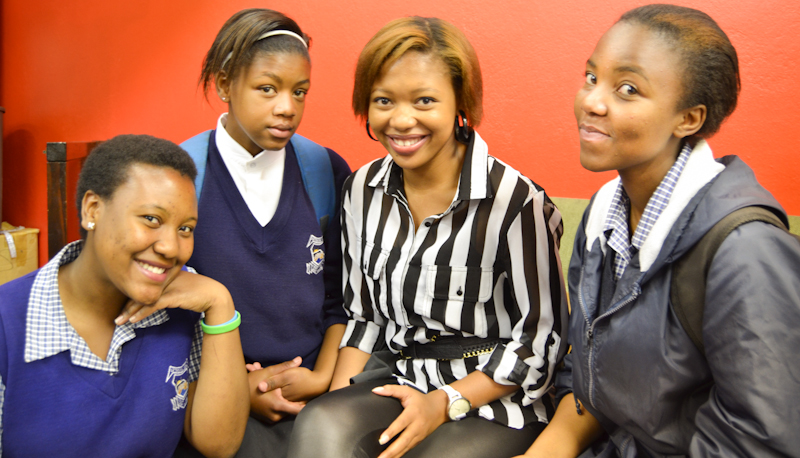 SMILES ALL ROUND: Wits mentors each got some highschool pupils to take under their wing for a day, From left to right: Philile Mashele, Palesa Mokoena, Tanyani Daku and Kedibone Rapoo. Photo: Pheladi Sethusa

Sixty uniformed pupils were beaming from ear to ear as they got a chance to walk up the steps, sit in the lecture halls and walk amongst ‘real’ students – things and people they had only ever seen on Wits’ promotional brochures.

A rare opportunity provided by the Wits Rag society made that possible. This year’s Take a Child to Varsity day was bigger and better. Last year only ten kids got to spend a day with a mentor, this year that number more than doubled said Wits Rag chairperson, Siphe Mkize.

“We take kids from underdeveloped areas … to help them get an idea of what to study when they come to varsity, as well as what they need to do to get there,” said Mkize.

A teacher from Lesebogo Girls High School in Soweto, Humbulani Mavhunga who ordinarily teaches grade 10’s and 11’s maths, accompanied pupils on their visit this past Wednesday.

“I took a range of learners, mostly the highest achievers and some who are sitting in the middle. I also took some low achieving learners, to show them what is possible if they work hard,” said Mavhunga.

The selected pupils were allocated a mentor from Wits, anyone from any faculty could volunteer their services for the day. The mentors who availed themselves this year were “very keen and patient with their kids,” said Mkize.

Tanyani Daku, a Media Studies mentor took three girls under her wing and spent her time giving advice from her personal experiences and answering questions posed by her inquisitive bunch.

Daku said she loved being a mentor and getting a chance to help kids with complicated social situations, focus on their academic lives and improvement thereof. [pullquote]“We must stop going to the zoo for school trips, rather come to varsity”[/pullquote]

The pupils she took under her wing could do nothing but sing her praises. Although not all of them wanted a media studies mentor, they were glad they all said what they learnt from their mentor was invaluable.

Stop going to the zoo!

“We must stop going to the zoo for school trips, rather come to varsity,” said an impassioned Daku, making her mentees roar with laughter.

Echoing words in the same vein, Mavhunga said that she hoped Wits Rag would continue with this initiative. “This opportunity helps kids to make informed decisions about their futures,” she said.

She said it was important to break down the legacy of students choosing careers within very narrow confines, Mavhunga wishes she had the chance to be exposed to university beforehand. [pullquote align=”right”]”… I thought Wits was very serious and just for people who want to pursue maths or physics but it’s not”[/pullquote]

“All we knew was teaching, nursing and being a policeman or woman,” said Mavhunga.

“Today blew me away. I thought Wits was very serious and just for people who want to pursue maths or physics but it’s not,” said grade 11 pupil, Philile Mashele. She cannot wait to come to varsity now that she has had a taste of what it’s really like.

Another pupil, Palesa Mokoena said that she was impressed with the way people seemed very “focused” on campus, she said it inspired her.

On a slightly different note, Mokoena’s fellow classmate, Kedibone Rapoo said that she was by no means prepared for varsity life and the pressures that come with it. However, “I am prepared to try by studying hard,” she said.