Kagisho Nkadimeng is one of six students who Wits University has taken to court and have an interdict against. In court papers Wits’ has called him “5th Respondent”. He is a member of the Fees Must Fall movement at Wits and a third-year Sociology and International Relations student. 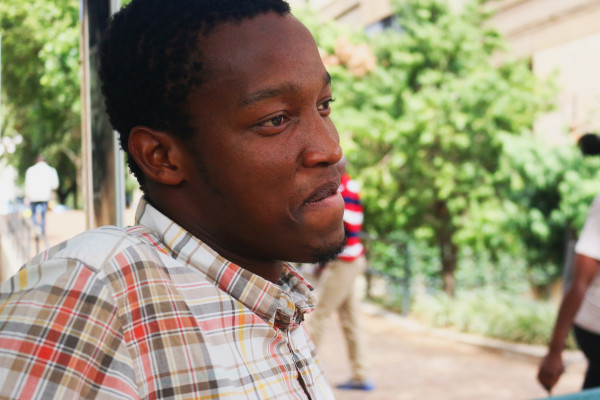 How did you end up in the interdict?

We had been planning to close down the University as a continuation from last year and it took about a week of planning in January and on the 11th we closed it [Wits] down and we were interdicted.

What led to the events on January 11?

We were not that many [people] so we chose to take the main admin building, the core of Wits which is Senate House. We closed the lifts so that staff couldn’t go up. We closed some entrances but not all of them. And we were just singing around the place.

Why were you doing that?

I came here around the 6th of January because I had financial issues so I came here to clear them up. Upon the grand realisation that many things that were promised last year were not adhered to by the same management that went on national and international media signing many documents saying that they would do this, but they didn’t do anything. So what happened was that, we were like, “so what should happen if you are relegating on the positions or agreements that you were party to?” Because we kept our end of the bargain in terms of continuing the academic program, writing and passing, we still don’t have fees. Children are crying [because] it’s still the same situation as last year… So we went back to the picket line.

What do you say to the belief some people hold that the movement has now become violent, racist and has degenerated to vandalism?

Society and the world is systematically violent against black bodies. Violence is the only way that we can make people listen. I am not saying that we support violence and all those things but closing down the university and stopping its businesses that seems, it’s seen as violent by the university. I mean, the SRC for example, pre the initial strike had been negotiating with management and nobody seemed to listen. Only when we took to the picket line did council come and negotiate with us. So it’s not violence but [protest] is the only tool of power that we have in order to make them listen. In order to make them aware and be cognisant of what is going on, on the ground. I think they [management] are just being ignorant of what’s happening.

Do you think that the movement is still relevant?

The movement is more relevant than ever. The issues of academic and financial exclusions are micro issues, there are [other] broader and underlying issues. By our very nature, coming to Wits we are sort of a privileged class, even if we are a privileged poor class, so then perhaps when Fees Must Fall has achieved all they want to achieve on campus, and across all campuses nationwide then it will be time to go and hit the communities. Maybe or maybe not in the same unorthodox way of shutting things down because outside the university you are dealing with the state organ and the state is different from dealing with an entity such as Wits, but through engaging communities, concientising them and making them aware that they have to start playing an active role in the world. I don’t think we will ever get to a utopia and say all our goals are met, there are so many socio-economic issues in society. We are all social activists even though not in the same numbers as last year we go to our individual communities and try to develop them whichever way we can. There will always be someone who will be inspire by the generation of Fees Must Fall. Perhaps the [mechanism] of protest of closing down might have ended, I don’t know, but there are still people who are driven by the goals and ethos of the movement. I don’t think the movement can ever really die.