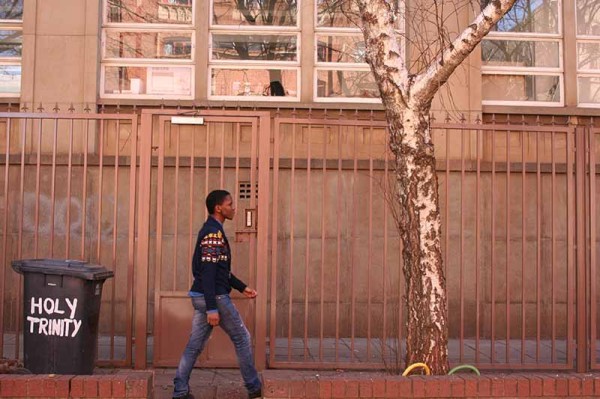 Let us in: The security coded gate that trinity residents may soon use to access main campus.
Photo: Nomatter Ndebele

Students at Trinity residence could soon access main campus through an entrance that was locked after a student was raped in the passageway between the residence and the School of Arts.

The entrance has been locked for almost 10 years.

Cathy Setlogelo, Trinity res manager, told Wits Vuvuzela she was concerned that students living at the res had to go around the block to the turnstiles on Jorissen Street or go through the Jan Smuts turnstile. While students go to campus for lectures and meal times, there are also Wits staff members who attend mass services at the church. “They have to drive all the way around to come and park at the church,” Setlogelo said

[pullquote align=”right”]“Why do we want to impose hardship, when we can make life easier?”[/pullquote]

Students making their way to campus in the evening have been flashed by men milling around outside the entrance of the residence.Female students have to ask their fellow male students to accompany them onto the campus, which Setlogelo said was “an inconvenience for the person not going to campus”.

” Why do we want to impose hardship, when we can make life easier” , said Setlogelo. Setlogelo said she has been concerned about the access issue for a long time, but didn’t know who to speak to. “I was unsure of the process” she said.

A larger gate between the residence and main campus is locked during the week as there is no means of controlling people’s access in and out of Trinity Church property. The gate is opened on Sundays to allow more parking space for people attending church services.

Setlogelo said she did not expect Wits to open the larger gate as she could understand the concern of the lack of security. People could walk straight through the church property and onto campus if the gate was open.

[pullquote align=”right”] “Our prayers have been answered”.[/pullquote]

Rob Kemp, head of campus control, said the little gate that allows entrance onto main campus has been out of use for such a long time as there was “no demand for it in the past”. Kemp said Trinity residence was not a Wits residence and, in the past, many people staying at the res didn’t need access to main campus. So, for security reasons, the turnstile was locked.

Kemp said it was too risky for students to walk through the passage as nobody could help them if they were accosted. “There is nowhere to shelter a guard at the turnstile,” he said. Students would therefore need a security code to use the gate, which is a shorter distance, to access campus. Although the gate and turnstile have not been in use for such a long time, they are in working order and can be reactivated if there is a need.

Kemp said he was willing to speak to the students and res manager to discuss the issue. Setlogela was overjoyed at hearing this, saying ” Our prayers have been answered”In the mean time, Kemp said, it would be better for students to use the turnstile entrance on Jan Smuts as it is better lit, has CCTV and there is a security guard there.

A first year student was robbed in her Wits Junction room in the dead of night by a man who made off with her cell phone and laptop last Thursday.

Head of campus control, Rob Kemp, said: “Access to the room was gained either by use of a key or the door was not locked.” He said the victim was taken to report the incident at Hillbrow station of the SA Police Service.

According to the first year’s floor mate, Aphelele Mpunzana, the robber entered the resident’s room at around 3am and strangled her to keep her quiet.

Mpunzana also does not believe a master key was used.

“Everyone in this building heard the banging of the doors,” said Mpunzana. “The guy tried to get into everyone’s room. If [the robber] had a master key he would have opened all the doors and not just hers.”

However, she said the main door to the building was unlocked because some student cards for new residents had not been activated.

Kemp said often students create a “serious breach of their own safety” by pressing the emergency release button in order to access their buildings without swiping cards. This is problematic because the door is left unlocked after the emergency button is pressed until security adjusts it back to normal.

Another resident of Block 7 said their student cards still do not work and they have to call security to open the main door for them. He said it was easier to keep the door open.

Both Mpunzana and  Thabo*, who lives in the next building admitted to pressing the emergency button and using coins and papers to prevent the door from closing.

“I don’t live [in this building] but I just walk in,” said Thabo. “Which means anyone can take a bus from main campus to Junction, come in here and take a shower.”

Mpunzana said she felt security at Junction was “generally good” but that this incident has made her more wary of her safety. “I’m definitely surprised that something like this can happen in what’s supposed to be the best res on campus.”

All rooms in the building were searched by security but none of the stolen items were recovered.

No arrests have been made and the first year has since moved to another building in Wits Junction.

Kemp said investigations into the robbery are ongoing and urged students not to bypass the security system for their own safety.

A recent spike in criminal activities in Braamfontein is spreading onto Wits’ main campus, according to Rob Kemp, head of Campus Control.

There have been at least 8 muggings at gunpoint in Braamfontein in the past few weeks, and 6 where dangerous weapons were used, according to statistics from the South African Police Service (SAPS).

On Tuesday, a female student was approached by two well-dressed male suspects near the Planetarium, who threatened her, apparently with a firearm, and took her cellphone.

Last month, Wits Vuvuzela reported a robbery apparently at gunpoint, at the science stadium while in March, two students were robbed at gunpoint outside the Cullen Library.

Kemp, said his biggest concern is that students are not aware that they could be targets of crime.

He said he wanted the Wits community to be streetwise without panicking. Lost or stolen student cards are a common way through which criminals gain access onto campuses and residences. ICAM is able to put a 24-hour block on lost cards if they are reported, and students do not have to pay to unblock them when they are found.

Some suspects also stand around turnstiles, asking students to give them access. Kemp said some of them tell “nice stories” to convince students that they are entering campus for good.

“I left my card in res, I’m rushing for a lecture can you please help,” he said as an example.

Spot checks for student cards are being conducted at bus stops. Campus Control investigations manager Michael Mahada said this is not done to “oppress or harass students”.

There is a proposal to fence the area around the bus stops to restrict access to circuit buses. However, he said it could be “very restrictive, very controlling, and we’re [sic] not sure how it would go down with our population.”

Campus Control plans to fill vacancies within the next two weeks to increase the number of officers on patrol. It has also budgeted for more staff next year, and plans to commission an extra reaction vehicle.

Avoid isolated areas on campus, including toilet facilities.  A student was recently robbed on his way out of a bathroom in the John Moffatt building. Kemp also advised students not to use empty tutorial or lecture rooms to study, they should rather find one that is already occupied.

Do not leave your valuables unattended in public places for any reason, for any length of time. The stranger next to you in the library that you ask to look after your laptop does not have to.

Do not leave your residence room unlocked, even to go to the bathroom down the corridor.

Keep cellphones and other mobile devices out of sight when on the road.

Ask to be escorted to your room or car if you are leaving campus late, and feeling unsafe. Camus control is available to escort Wits staff and students to Wits residences and car parks, and can be contacted on (011) 717-4444. Students living in Braam are urged to ask Urban Genesys security guards (dressed in green and beige uniforms) for escorting.