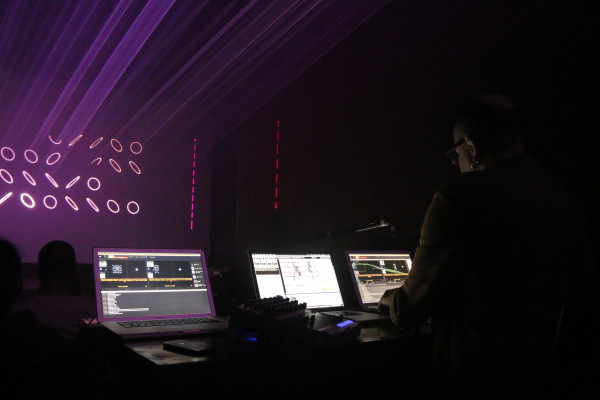 Lasers and techno music, performed by a German software designer, was the opening act to this year’s Fak’ugesi festival at the Alex Theatre in Braamfontein.

“The festival is fundamentally about stimulating innovation and creativity through the crossover of technology and creative arts,” said head of the digital arts division and one of the creators of the festival Prof. Christo Doherty.

This is the second year that the festival is being held in Braamfontein. A wide range of different activities will feature in them festival for the next 3 weeks such as game design work shops, video games exhibition, robot arm building workshops, Market Hacks and many others.

The first event kicked off with major international performer Robert Henke, who is “the god of a genre called intelligent techno”  said Prof. Doherty.

Robert Henke creates a new form of art by using computer science and sound engineering to combine lasers and techno music in a way that they flow together creating a unique audio visual experience.

“And Robert, in many ways, exemplifies what the Fak’ugesi festival is about because he’s both [sic] a musician, he’s a software developer, programmer and he’s an artist, a visual artist,” said Prof. Doherty.

Before dabbling with lasers Henke made his own techno music. “At some point I thought, hey actually lasers is an interesting medium, mainly because it has such a bad reputation,” said Henke.

The show began in complete darkness, then a small purple vertical line appeared and moved across on the screen. It was followed by others as the beats increased.

As the night progressed letters and words were introduced in with the shapes merging into each other as they danced to the beat.

The show worked seamlessly with the music, piano was played when the shapes were not as actively moving about followed by a techno beat to show increased activity.