Rape- A South African nightmare is a book that is written by Professor Pumla Gqola, the launch was on campus this week.

AFRICAN Literature Professor Pumla Gqola finally had her book launch at the event hosted by the Wits Institute for Social and Economic Research (WISER) after delays caused by student protests of 2015.

Chaired by African Literature lecturer, Dr Danai Mupotsa, the panel discussion included poet and historian, Sarah Godsell and Malebo Gololo, of the Developmental Studies and International Relations department sharing their viewpoints on how rape is perceived.

“This book is the kind of writing that is dense with thinking feeling,” says Mupotsa.

Gqola says she tried to contribute to a shift to end gender-based violence in society, like who we hold accountable. “All of us have a beloved who is a rapist,” says Gqola.

She highlights that rapists are usually people who are well known to the victim and this often intensifies the complex relationship between the perpetrator and the victim. Gqola’s research explores the notion that rapists sometimes have backgrounds involving abuse and sexual violence. “I wanted to contribute differently, to think about how rape victimises. We make it unacceptable to claim victim status” she explained. 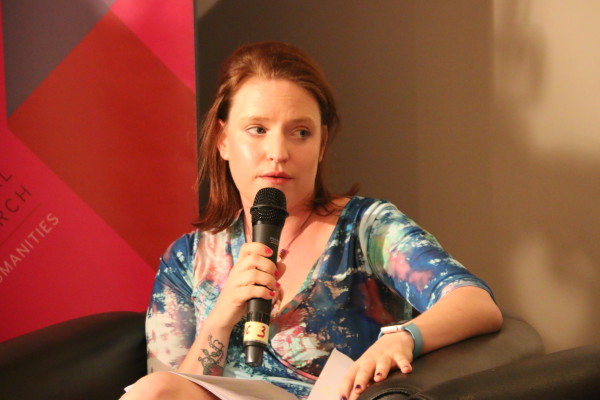 SPEAKING OUT: Sarah Godsell spoke about sexual harassment claims made by students and staff on campus. Photo: Michelle Gumede

The book also looks at high-profile rape trials and accusations of President Jacob Zuma, Bob Hewitt, Makhaya Ntini and Baby Tshepang. The book also takes on the notion that rapists are only poor and violent men. She highlights various rape cases that involve well off men as the perpetrator, including the case of South African president Jacob Zuma.

Gqola says when she wrote the book she was sick and tired of being sore about rape and how much time it took up in her life.

“I felt increasingly that everyone was talking about rape and those conversations were very different from the ones I was having,” says Gqola.

Godsell in her presentation read the moving poetry of Thandokuhle Mngqibisa and she spoke at length about how it is also important to talk about the violence on our campuses. “There have been accusations of sexual harrassment at the hands of private security. These accusations have been discredited, ignored and silenced.” says Godsell. She said that instead campus should be a safe space for all, a space for everyone to be able to speak openly about their experiences with harassment.

Mupotsa shared with the audience that a student had told her that an unknown man came up to her on Monday and said, “When I look at your eyes I’m already fucking you”.

“We live in a society where rape is normalised and there are no consequences for raping,” Gqola says.

The book seems to have been well received by members of the audience in attendance at the talk. There were serious engagements going on with what the book discusses whilst others proposed solutions to dealing with rapists in South African communities, like socially shaming rapists or bringing back the death penalty with “lynching”.

Some of the audience members spoke to Wits Vuvuzela about the event.

“I came to the launch to enhance my knowledge about patriarchy,” says Ugandan student Ibrahim Tamale, who is currently studying African philosophies at the African Youth Academy.