Learners at King David High School in Victory Park remain divided over the recent furore around a Facebook picture of their deputy head boy wearing a Palestinian scarf.

Two learners spoke to Wits Vuvuzela about the atmosphere at the school as the South African Jewish Board of Education (SAJBE)  took a decision last night not to take any action against Joshua Broomberg for the contentious picture.

In a statement released this morning, the SABJE which oversees King David said: “We acknowledge that the picture posted was insensitive and hurtful and was seen as such in the community. This has been a learning opportunity for the 17 year old pupil concerned and he has both explained his stance in a later posting [on Facebook] and genuinely apologized [sic] for the hurt it produced.”

“This statement … brings the matter to a close with no further action to be taken,” read the statement.

But despite this apparent end to the matter, learners at King David describe the atmosphere at their school as “one of tension”.

Wits Vuvuzela has learned that yesterday, the director of the SABJE, Rabbi Craig Kacev addressed the entire school about the matter.

“They only teach one view – to support Israel wholeheartedly and fully.”

According to one of the learners at the school, who did not want to be named, “He (Kacev) recognised that the school is apolitical, but then said that what Josh (Broomberg) did was against the school’s political views (of Zionism). He also that they (the school) support critical thinking and debate, but to be honest, they only teach one view – to support Israel wholeheartedly and fully.”

“The feeling in the school is one of tension. The kids are all divided and friends are arguing over what is going on,” said the learner.

“People are scared to say anything too “drastic” though, for fear of being ostracized and attacked.”

A second learner, who also declined to be identified, said that some learners found the criticism aimed at Broomberg “sickening”.

“I cannot and refuse to comprehend how adults, our moral responsible leaders, have openly vilified, humiliated and even threatened a 17 year old boy for expressing a view.”

Saul Musker, a Wits University student and one of people in the photograph with Broomberg, says he does not regret taking the photograph.

“It was without a doubt the right thing to do, and the community is richer for the conversation that is now being had. It’s about time that the right-wing fascism that characterises a part of the Jewish community was exposed,” he told Wits Vuvuzela today.

Ariela Carno, the national chairperson of the South African Union of Jewish Students (SAUJS) and former head girl at the King David High School (Linksfield), said that the fact Broomberg made a statement through an image made it open to misinterpretation because of the anti-Israeli sentiment caused by the current situation in the Middle East.  She also said that it was up to the school how to deal with the situation, and not up to the outside community.

“What I think Josh meant to say was that you can stand against Palestine in the sense of being against Hamas, but that does not mean you are against the people of Palestine. Unfortunately the way he said it was not sensitive to the Jewish community. It was understandable, he had very good intentions and is still young. He will learn from this,” she told Wits Vuvuzela.

“I do think the school needs to have a discussion with him though about how actions have consequences,” Carno said.

The furore around Broomberg erupted last week after the photograph was posted to Facebook showing him, Musker and another member of the South African debating team wearing Palestinian badges and keffiyehs (traditional Palestinian scarves).

An online petition, started by the group ‘Concerned Zionists’, was then circulated calling for the removal of Broomberg as the deputy head boy of King David and the revocation of his honours award. 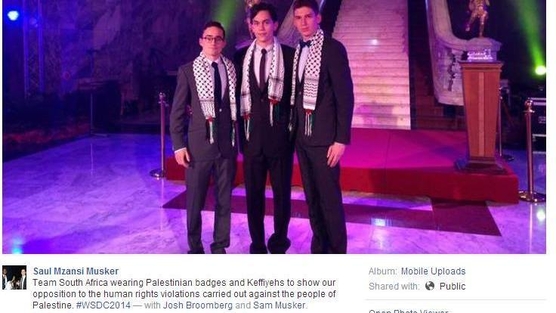