STUDENTS GATHERED at the Senate House concourse on Tuesday afternoon to witness the unveiling of Solomon Mahlangu House’s plaque but were surprised to find a no show.   END_OF_DOCUMENT_TOKEN_TO_BE_REPLACED

END_OF_DOCUMENT_TOKEN_TO_BE_REPLACED

Former Wits SRC member Jamie Mighti walked out of a Wits town hall earlier today after he found himself in a shouting match with VC Adam Habib.

A Wits town hall ended in tension earlier today after a shouting match between Vice Chancellor Prof Adam Habib and former SRC member Jamie Mighti,  with the latter leaving the room when the argument reached a boiling point.

During the town hall, Mighti shouted his suggestion from the back of the room that Habib should order police to protect Wits students in Braamfontein, Habib shouted back that this was illegal for him to do.

Mighti insisted that the University of Johannesburg has such initiatives in place. Habib responded that it’s the responsibility of the municipality to do that.

The two parties then had a shouting match, with both accusing the other was ‘lying’.

Mighti said that Habib “Should stop lying to the students.” Mighti, who was wearing an Student Representative Council blazer, told all present that he is no longer a member of the SRC.

After the publicly heated argument, Mighti and several other students left the Senate Room. Habib continued with the meeting.

SRC president Shaeera Kalla told Wits Vuvuzela, “Town hall meetings for me are a space where things can really get unproductive, close to election time you find that parties come and want to have the loudest voice or the loudest bark.”

Kalla said she doesn’t appreciate students walking out like that, because they’ve come here to engage. “It’s a common tendency sometimes that when things don’t go your way to walk out, it’s a bit cowardly. But I do appreciate the input, and I think it’s fair to have input of that nature. The vice chancellor should be accountable and I really don’t think its professional of him to scream at students like that. There must be respectful engagement from both sides,” said Kalla.

On addressing the issue of Wits students safety outside of the university, Habib said he cannot control neighbourhoods surrounding student residences, such as Esselen residence in Hillbrow. “I don’t have the authority to look after Hilbrow,” he said. Habib added that he believed Esselen residence should be closed down.

Drugs no longer a problem at Wits

Everything from condoms to toothbrushes can be found at two new vending machines at Senate House and the FNB building on West Campus, though some students have criticised their high prices.

A pack of Disprin, which costs no more than R20 at your local supermarket, will cost you almost double,at R35, at the vending machine.

According to its operator,PharmaShop24, this is not a typical vending machine. It is specially designed to dispense health care products, and your daily medical essentials from A-Z at a simple push of a button.

When students were asked about their opinions about the vending machines, reactions varied.

“I think that these are awesome,” saidMpumelelo Tshabalala, 2nd year BA Law. “There are so many times where I have needed medication, like Panado for a headache, and I’ve had to hike around campus looking for some, this is going to be a huge help.”

Other students were only critical of the machine’s high prices. “I think the prices are way too high for me,” said Ismael Motsoeneng, 1st year BA. “Some prices were not too bad, but I’d rather go somewhere else.”

The company, PharmaShop24, has placed these machines at high traffic points at the university, aiming for high convenience.

PharmaShop24, says that concept and design can be found all over Europe, Japan, USA and now in South Africa.

Initially implemented at Shell service stations around the counter, the South African team has been actively modifying and adapting this concept since early 2012 to introduce it into universities. 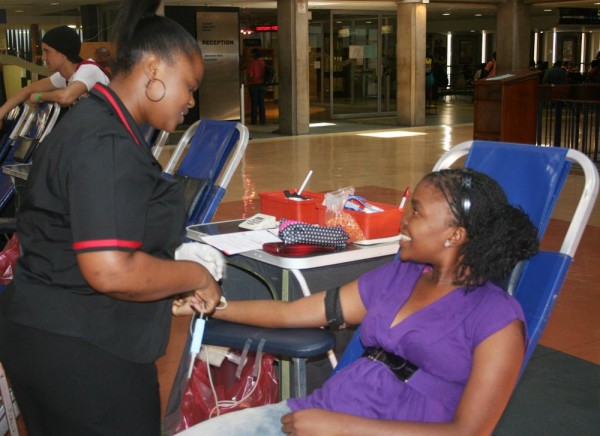 Put your guard up for parking space

You had better pray to the car gods and find the car guards if you want to find a parking spot on the roads outside Wits.

“Welcome to Godfrey’s garage,” says Godfrey Nkosi as he directs you onto the pavement, where Jorissen Street runs from west to east campus.

Nkosi says he has been working as an informal car guard outside Wits for 19 years.

Godfrey’s “garage” lies outside Senate House, in front of a gate with a sign which states: “Emergency entrance and exit. No parking in front of this gate at all times.”

There are four cars parked in front of the gate.

Two car guards operate along Jorissen Street, from Enoch Santonga Avenue to Bertha Street. From about 8am on weekday mornings, the street is full of cars parked next to the pavement and motorists struggle to find a space.

Last year some of Nkosi’s counterparts stopped working in Braamfontein as a system of official parking bays controlled by marshals moved in.

Ace Parking Services began operating a pay-before-you-park system, with official marshals charging customers for parking roadside in Braamfontein and in the CBD.

On the same road, just past one set of robots, official marshals monitor the length of time that cars park in the designated bays and fine motorists who exceed their allocated time.

“I own this street,” says Patrick Gemu, another informal car guard outside Wits. Nkosi and Gemu are not worried about Ace Parking taking over their territory.

“Students have no money; they can’t afford to pay R8 an hour to park,” says Gemu, referring to the rate

“We are more than willing to [provide] a service there [outside of Wits], unfortunately it is not in our control,” says Juliet Paulsen, managing director of Ace Parking Services.

Paulsen says her company cannot operate on this section of Jorissen Street as the Johannesburg Metro Police (JMPD) has said it lacks allocated parking bays and parking notice boards.