Xhosa struggle is a black and white issue 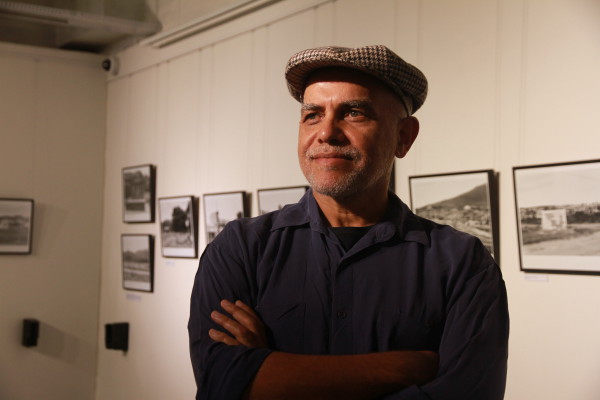 UNSETTLING HISTORY: Cedric Nunn posing with some of his photographs from the Unsettled exhibition on the opening night. Photo Sibongile Machika

A black-and-white photographic exhibition highlighting the struggle of the Xhosa people opened at Wits Art Museum (WAM) this week.

The exhibition reflects the story of the Xhosa people that managed to resist British and Boer domination for 100 years in the Eastern Cape. The people in his portraits are the descendants of active participants in the wars and negotiations of that time.

“All this before the Shaka reign, yet history does not remember the Xhosas with the same glory.”

Nunn started his career documenting the realities of apartheid. His work mainly focuses on social change with particular interest in rural communities and issues. But reflecting a 100-year journey authentically was difficult. He said he focused on landscapes because land has an amazing ability to hold time. Black and white photography simply enhances that effect, said Nunn.

“This is an incredible story,” said Nunn. “That’s why I was drawn to it. Often people forget to see the good. Here is a nation that resisted British rule for 100 years,” Nunn said.

They had a dignity and code of conduct that carried them throughout the nine wars that played out at the time. “All this before the Shaka reign, yet history does not remember the Xhosas with the same glory,” said Nunn.

He said he felt a deep connection to this story because he is a descendant of a British settler who went on to marry a Zulu woman at time when it was seen as the ultimate taboo. More importantly this is a South African and that’s why it matters to him.

This project took three years to complete and was funded by Mellon Senior Scholar funding from Rhodes University. The scholarship allowed Nunn to be entrenched in the Grahamstown community while doing his work. Most of the pictures were shot in film so it took months before he could see the results of his work.

“More importantly this is a South African and that’s why it matters to him.”

Nunn said he hopes to leave a positive legacy for young South Africans and his exhibitions are one way of doing it. Unsettled depicts an important time in South African history and showcases the strength, dignity and humility of the Xhosa people which Nunn said he could still experience 150 years later.

Unsettled: One Hundred Years War of Resistance by Xhosa against Boer and British is showing from the 10th March to the 12th April 2015. WAM is open to the public Wednesday – Friday between 10a.m and 6p.m.