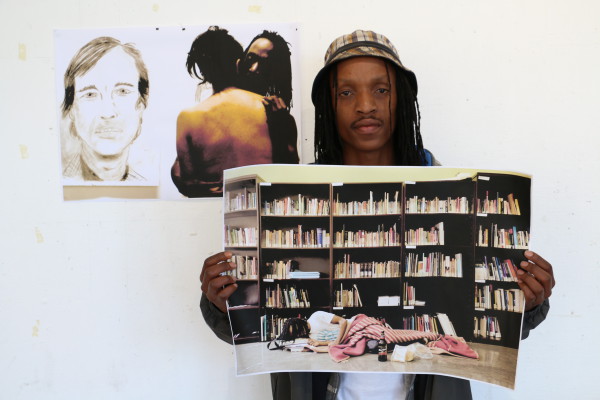 TRANSFORMATION AT WITS: Sithembiso Khalishwayo, winner of this year’s photographic competition stands with his two submitted pieces. One was on interracial love and the other touched on one of the issues that Wits students face.

Students share their views and experiences about transformation in a photographic exhibition.

It took the judges of this year’s Wits photographic competition many days of deliberation and debate to choose which contestant truly reflected transformation.

For the past six years the competition has tried to provide students with a safe platform to discuss their views on transformation.

The Employment Equity office has run the exhibition and more recently it has been organised in partnership with Black like me – a brand that sells hair-care products to black women.

“I think what it does it just gets artists to kind of focus their art and focus some of their views on social issues of transformation that affect us,” said one of the judges, Thambi Pooe a SRC Transformation officer. This year’s theme was Journeys: Reflections of Transformation.

The criterion that was used to evaluate the photographs was a combination of whether the photos touched on social justice issues and whether they had an artistic appeal. The judges had to choose from 160 photographs submitted by 40 people, which included students and staff.

They finally announced Sithembiso Khalishwayo as the winner, with Lucky Mqoboli in second, Samantha Camara in third and Cindy Dlala in fourth.

Khalishwayo was awarded first place at the opening of the transformation photographic exhibition at John Moffat by the head of Transformation and Employment Equity office Lindiwe Manyika.

“We chose this one winner because first of all this individual explored themes that not only the broader transformation theme but themes that resonate very closely to Wits students in one of the images that he took,” said Pooe.

Sithembiso Khalishwayo, MA Applied Theatre candidate, said that winning for him was just a bonus. “…right from the start, when I took those photos it was not about winning it was about, let me just tell the story and hopefully people can see that story. That has always been enough for me.”

Khalishwayo thinks that the theme of transformation relates to what is happening in Wits, on campus and with the students.

“For me it really explores how we view Wits, how we view society and how do we change things that we don’t like.”

“I just thought of ways that I could put the ideas I had regarding gender and different gender identities and how I could put that down visually.”

She said the competition provided students with a platform to discuss different issues and their experiences with transformation.

Other contestants also enjoyed engaging with the theme in their own way.

“I think I liked the theme for this year because it speaks to what people are going through and what’s going on with culture,” said BA student and second-place winner Lucky Mqoboli.

His photographic series focused on how to “push the struggle of African Languages” as he believes they are being discriminated against by institutions such as Wits.

“I think it’s a great theme because it allows for a span of thought to come to mind. Like, I mean, it’s transformation, it’s reflections,” said Mineenhle Maphumulo, a BSc urban and regional planning student, who received an honourable mention.

She engaged with the topic in a different way: “Well I tried showing it in reflections, in different skin colour because that’s one of the key issues and key concept ideas considering South Africa’s context.”

By Thuletho Zwane and Mia Swart

Sithembiso Khalishwayo, simply known as ‘Sthe’, appears and screams in anger: “As a child, I thought like a child, I spoke as a child. As a child I spoke of ignorance, ignorance is bliss”.

Water Glasses covered in Packets of Salt is a physical theatre production, with elements of dance, about gender roles and sexuality. It asks if sex remains a sacred bond between two people, or if it has transformed into something that happens when it’s desired or taken by force, leaving a path of emptiness, guilt and fear.

He wanted people to experience the same emotions he felt when he performed, he said. The play has a mixed bag of emotions – “emotions we as human beings don’t want to feel but we have to feel them at a certain point in time.”

Sthe said [pullquote align=”right”]The play came from a very personal space. It encapsulated his stories and stories of other people. “I wanted to show a side of me that I haven’t shown in a while, who I am, how I view the world.[/pullquote]

“If you want to see theatre at its core, people should come watch it. It is an emotional rollercoaster.”

Sthe is an actor, teacher, writer, dancer and choreographer who studied at the Wits School of Arts, majoring in physical theatre and performance.

The play is one of a series of plays in the Drama for Life Sex Actually festival, which will run from August 20 to 31 at the Wits Theatre. Water Glasses covered in Packets of Salt will be performed August 23 at 6pm and on August 29 at 1.15pm at the Wits Downstairs Theatre.