For the third year running, the Wits Language School (WLS) is hosting a South African Sign Language (SASL) song translation competition where R7500 is up for grabs.

This competition is in honour and recognition of Deaf Awareness Month which falls in September.

The aim of the competition is to raise awareness of deafness, as well as to encourage deaf and hearing persons to work together.

Eligibility: The competition is open to anyone resident in South Africa – individual or group performances, both hearing and deaf. There is no age restriction.

Competition entry: Being part of it is easy – all you need to do is select any English song, perform it in South African Sign Language, record the performance then share it with us on YouTube! 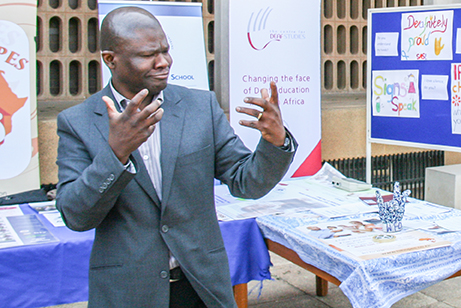 Less than two weeks remain to enter the second season of So You Think You Can Sign, the South Africa Sign Language (SASL) song translation competition.

This year’s theme for Deaf Awareness Month is “equality for deaf people”. The competition is part of a campaign to raise awareness of deafness and to encourage deaf and hearing people to work together.

The closing date for the competition is Monday, September 23 at 12pm.

The competition involves translating any song performed in English to SASL and recording yourself. You then submit your video for judging by a panel of hearing and deaf judges who can sign.

Entrants can choose any song they want as long as it is in English and doesn’t have any vulgar or discriminatory lyrics.

Lucas Magongwa, lecturer and coordinator of deaf education programmes at the Wits Centre for Deaf Studies, said: “Entrants will be judged on the use of facial expressions and emotions as well as their choreography and movement.”

Other judging criteria include the quality of the signing, the use of SASL as opposed to signed English, and including subtitles in your video.

Anyone in the country, whether they’re hearing or deaf, can enter So You Think You Can Sign and entries are open to individual and group performances.

Winners of the competition will receive R5 000 and a feature on SABC3’s Deaf TV, as well as a trophy and a Wits Language School certificate of recognition. The first and second runners up as well as the winner of the public vote will receive R1 000 and certificates.

“This is a great way to make our students aware,” Magongwa said, adding that many people don’t know how difficult it is for deaf students to get into university. Wits has only four deaf students at the moment.

The Wits Language School and the Centre for Deaf Studies have set up an information stand outside the library on education campus to get the message about equality for deaf people out this year.

Students can go there to get information on the history of deaf movements around the world, the sign language course and activities around Deaf Awareness Month. There is also the opportunity for students to learn a few words in SASL at the stands.

The Wits Language School is hosting the competition and it started in August. This is the second year running for So You Think You Can Sign.