A better quality of life is being promised to residents, as several projects get underway. END_OF_DOCUMENT_TOKEN_TO_BE_REPLACED

Searching for student accommodation made easier through an online platform.

END_OF_DOCUMENT_TOKEN_TO_BE_REPLACED

STUDENTS disrupted academics at Wits and marched to the City of Johannesburg (CoJ) buildings to hand over a memorandum of demands to mayor Herman Mashaba, on Thursday, September 27, calling for affordable student accommodation.

The Wits Student Representative Council (SRC) and All Residence Council (ARC) called for an academic shutdown so that interested students could join the march to protest against a rumoured 10% increment in residence fees for 2019.

The protest was a joint action between Wits student political formations such as SASCO, PYA, EFF and PASMA, and students from the University of Johannesburg and the Central Johannesburg College, who all marched under the banner #AccommodationIsLand.

Their demands included: the scrapping of council rates for universities and TVET colleges; council rates for private student accommodation providers such as South Point to be capped in order to stabilise prices; some of the 71 hijacked buildings identified by the CoJ for expropriation to be handed to universities along with money for institutions to develop them into student accommodation; and for a satellite clinic and police station to be opened in Braamfontein.

According to ARC chair Mookameli Moeketsi, the ARC and SRC consolidated the list of demands in March and thereafter emailed it to Mashaba, who didn’t respond. “We want to show them that we are serious about accommodation and we are prepared to fight for it,” he said.

Protesters gathered at the Wits Theatre in the morning and began to march through campus, disrupting lectures by pulling the fire alarms in buildings and singing in lecture halls until students evacuated. A History 102 test was also disrupted by marchers.

“This is about student homelessness. The ‘Harvard of Africa’ can’t be having students sleeping in libraries and toilets,” said a third-year economics student who asked not to be named.

Wits dean of students Jerome September said the university had denied the SRC’s request for lectures to be cancelled after midday because the university is approaching final exams.

“The university’s academic programme will continue as scheduled and students who wish to participate in today’s march do so on a voluntary basis. The necessary security arrangements have been made to ensure that university activities continue without disruption,” he said.

By the time the crowd left campus, it had grown to about 500 students and proceeded to march through the streets of Braamfontein. As the protesters approached, businesses closed their shutters and workers affiliated with the EFF joined the protesters.

Protesters held placards with slogans such as: “accommodation is land”, “free healthcare facilities in Braam”, and “liberate the student, liberate the land”.

Throughout the march, students were addressed by Wits SRC president, Orediretse Masebe. “At the end of the day we are here because we are black and we are landless,” Masebe said.

Mayor Mashaba met the protesters outside the CoJ buildings. They demanded that Mashaba respond to the memorandum within seven days and that he arrange an emergency meeting with Wits vice-chancellor Prof Adam Habib, and South Point executive director Ndumiso Davidson, at 9am on Friday, September 28.

Mashaba accepted the memorandum, stating that he would look at the demands and respond timeously. However, he could not commit to calling an emergency meeting. “I don’t want to lie to students. I don’t know what Habib’s diary looks like and I have commitments I cannot get out of,” he said.

“We’ve made it clear that 30% of the hijacked buildings that have been identified must go to student housing and be offered for rent between R800 – R1200 per month. We are engaging with private investors and offering them incentives such as reducing the cost of rates,” Mashaba told Wits Vuvuzela.

September told Wits Vuvuzela that the university was already engaged with the CoJ on matters such as reducing rates and increasing accommodation for students. “The lack of accommodation is an issue that requires a long-term solution. The university is working with student representatives and the public and private sectors at various levels to intensify efforts to seek medium and long-term challenges to resolve the accommodation crisis,” he said.

He also said that no decisions regarding 2019 fees or accommodation increases had been made yet.

The protesters have threatened to escalate the protests if they do not receive a response to their demands within seven days. They also demanded that Wits observe an academic shutdown on Friday, September 28, in solidarity with protesters.

The construction site of the new South Point student accommodation on Jorissen Street is lying empty after the main contractor, Liviero Building, was liquidated earlier this week.

END_OF_DOCUMENT_TOKEN_TO_BE_REPLACED

It is day 3 of the accommodation protest action at the Nelson Mandela Metropolitan University as students have staged a sit-in at the university’s main building to have their demands heard.

An accommodation crisis at the Nelson Mandela Metropolitan University (NMMU) in Port Elizabeth has caused students and Student Representative Council (SRC) to stage a sit in at the university’s main building.

The sit-in, which had been going on since Sunday night, is aimed at accommodation. Hundreds of NMMU students who have found themselves without a bed despite having been accepted by the schools accommodation office.

“[Things were] hostile last night because students had blocked the building, however we are waiting to meet with the vice chancellor today,” Baxolile Nodada, SRC secretary general at NMMU, told Wits Vuvuzela.

According to the NMMU SRC, the university has 3 237 beds on-campus divided between George and Port Elizabeth campuses which only extends to 11.9% of the total student population. Of these beds, 33% currently accommodate first year students.

Nodada said no outcome was established at last night’s protest action but the university’s vice-chancellor, Prof Derrick Swartz, had committed to meet with students and the SRC where the group intends to hand him their memorandum of demands.

Nodada said the SRC has been accommodating students who are in need.

“We have found that some students were sleeping at police stations, outside buildings, in the SRC offices while some of them are sleeping in the toilet and the labs,” said Nodada

“70% of these students are from the poorest province in the country and cannot afford the off campus accommodation,” Nodada said.

Nodada added that the SRC through donations and partnerships is trying to accommodate and feed the displaced students at the Ekhaya residence “but there is not enough space for all of them”.

2nd day of lectures,still haven’t gone to any classes because of the #NMMUResCrisis

Students live it up in container homes 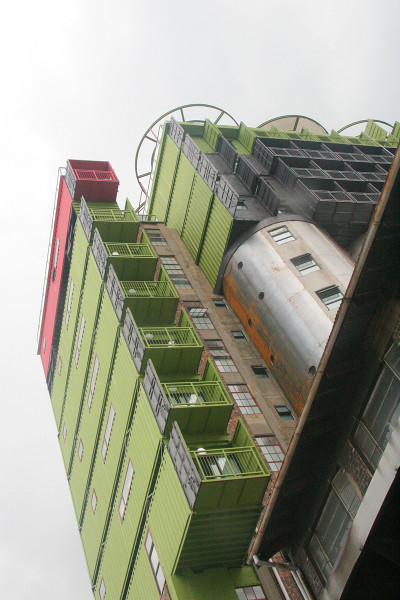 Mill Junction in Newtown is an example of creative, low cost housing in the city. Photo: Pheladi Sethusa

Distinctive green and red rectangles and circles that can be seen from miles away are part of a new off-campus residential building for students.

Turning the old into new

The residence is at its core made from the abandoned grain silos and re-purposed shipping containers.  An interesting exploration of architectural creativity and ingenuity, which provides affordable housing to students.

The diverse colour palate on the exterior of the building bleeds into its interior, which each of the 14 floors of the 40 million rand building painted a different colour to add to its overall “funk”.

CEO of Citiq Property, Paul Lapman, explained that there are ten silos in total, two rows of five which go up ten floors, the remaining top four floors are made from shipping containers. “We’ve actually used the inside of the silos to lay out the corridors, put the lifts in, put the stairs in and everything else,” he added.

The middlemost silos on each floor are painted a different colour and host a different recreational area – every second floor has a communal TV room, others are study rooms, computer rooms and one is a gym. Along with this each floor is fitted with two communal kitchens, communal bathrooms and private bathrooms for those who need their privacy.

Up in the air

After a year of construction, the building signed up between 260 and 270 of the 374 spaces available within their first month of opening, the top most floors filling up first because of the exceptional city views provided by the skyscraper. The huffing and puffing from walking up the 14 floors with Lapham abated as soon as the panoramic beauty of Johannesburg came into view. 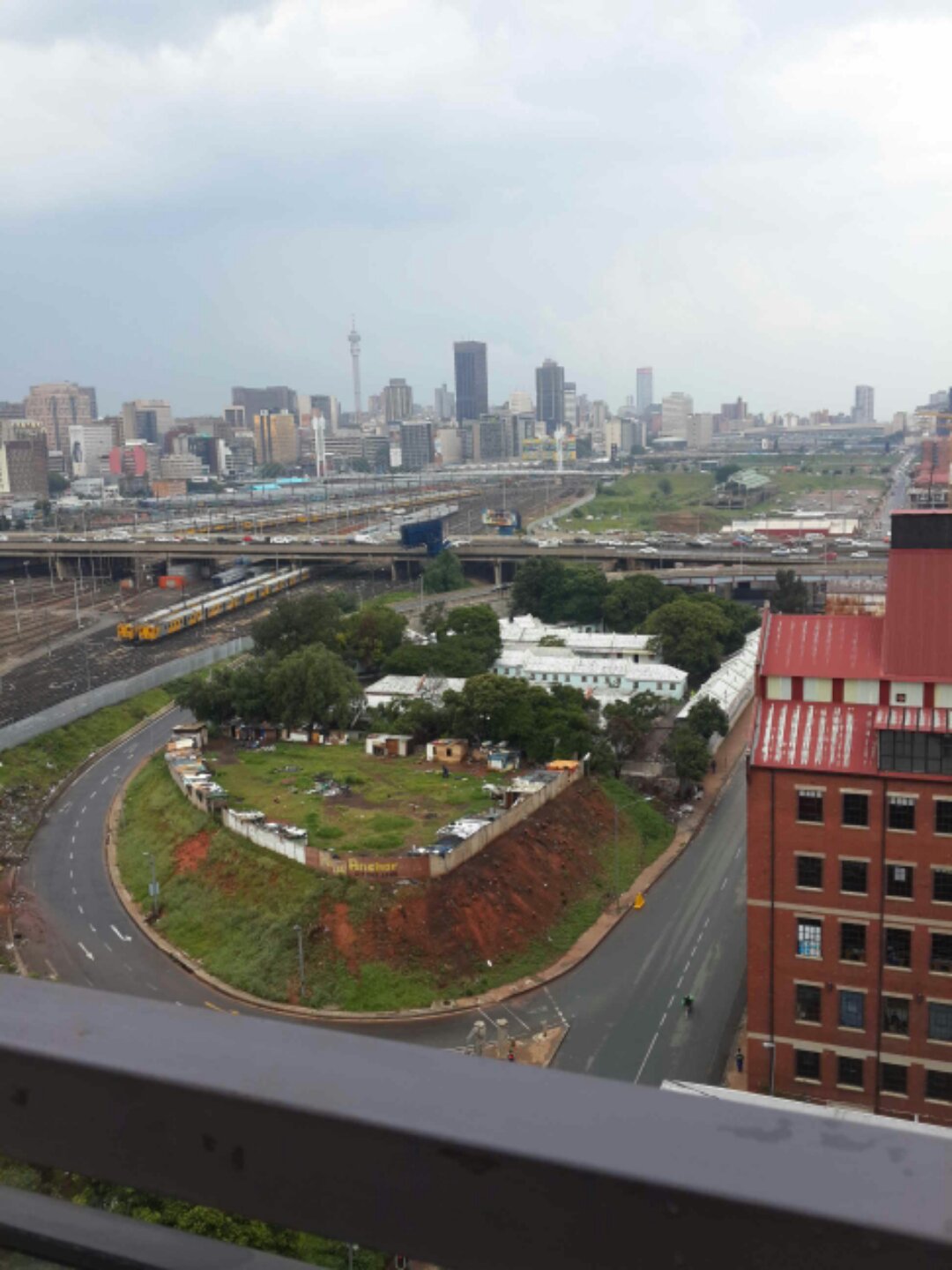 A view from the eastern most side on Mill Junction’s rooftop. Photo: Pheladi Sethusa

The rooftop is still a work in progress but when it is done it will provide students with a rooftop braai area and another space to socialise – fitting considering the boom of rooftops as social spaces in the inner city at the moment.

The motion sensor lights, magnetic stoves and double glazed windows are some of Mill Junction’s environmentally conscious elements. “We’ve sourced quite a lot of the materials from China,” leaving them with enough money to provide energy efficient facilities said Lapham.

Making use of the old silos was also another “green” feature, Lapham said they could have easily chosen to knock down the silos and build from scratch but they had chosen to “preserve some of Joburg’s history and do something different”.