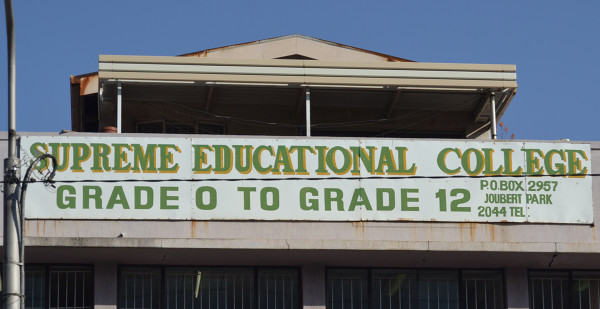 Matric learners at the Supreme Educational College in Braamfontein have accused their school of short-changing them by only registering them for five subjects instead of the seven required for a matric certificate.

Wits Vuvuzela interviewed six Supreme College learners, who asked not to be named.

“They are saying we must do five subjects this year and do two subjects next year. This means we cannot apply for university now,” said one of the learners.

The learners provided Wits Vuvuzela with forms listing the schools full-time and part-time “candidates”. They said they were full time learners however their names appeared on the list for “part-time”.

“We did not sign for part-time. They told us that it is because we will not be able to manage the workload. I don’t understand because we are still taught seven subjects but we will only write five for finals,” another learner said.[pullquote align=”right”]“Every time we ask what is happening we are sent to a different person in management. They all say it is not their concern.”[/pullquote]

Management does the shuffle

The learners told Wits Vuvuzela they asked school officials about why they were only taking five subjects but were refused a direct response.

“They told us ‘that is for us to know’,” one student said.

[pullquote]“The school fee is R800 per month. Learners who agreed to the five subjects are only paying R600. I am still paying R800 but now I am being forced to be part-time.”[/pullquote]Another student added: “Every time we ask what is happening we are sent to a different person in management. They all say it is not their concern.”

The learners said some agreed to take only five subjects because they received a discount on their school fees.

“The school fee is R800 per month. Learners who agreed to the five subjects are only paying R600. I am still paying R800 but now I am being forced to be part-time,” the learner said.

The learners said the school had disregarded their right to choose and did not take their financial status into consideration. The learners admitted that they had become disheartened and had nothing “driving” them to attend classes.

Wits Vuvuzela spoke to a parent who did not want to be named in order to protect her child.

“My child’s education is suffering. She is getting old now. She cannot return again next year. This is not fair.”

Wits Vuvuzela approached the provincial department of education with the learners’ allegations but were told that regulating independent school’s like Supreme College was difficult. However, the department said that it had made enquiries at Supreme and it found “no evidence” to support the learners’ allegations.[pullquote align=”right”]’You guys think you are clever going around telling people what is going on at the school. Why are you doing that? When you have a problem with your father do you go around and tell the neighbours?’[/pullquote]

“Departmental documents indicate that all 47 learners are registered to write seven subjects this year,” the department said in an email to Wits Vuvuzela.

Following enquiries by the department, the learners alleged that Ncube gathered the matrics and accused them of stirring trouble.

“’You guys think you are clever going around telling people what is going on at the school. Why are you doing that? When you have a problem with your father do you go around and tell the neighbours?’,” the learner recounted.

The learners said their parents were even confused as to what was happening.

“My dad went and asked. They confused him with long answers,” the learner said.

Learners accused the school of fabricating their marks. They said they had not written a third Afrikaans examin June but had still received marks for it.

Ncube told Wits Vuvuzela that the third Afrikaans exam was not written as the teacher left. The marks on the learners’ report card for the third exam reflected an aggregate of their marks throughout the term.

by Shandukani Mulaudzi and Emelia Motsai

TEACHERS resigning from the Supreme Educational College in Braamfontein have left matric students stranded just before their preliminary exams.

A parent of two children attending the school, Gideon Ndlovu, said he was concerned his children were not learning anything at the school as teachers were resigning with no replacement staff.[pullquote align=”right”]“Teachers are not getting paid. It’s been two months now. They have been paying us R1 000 instead of our normal pay.”[/pullquote]

He said teachers were leaving because they were not being paid their full salaries as stipulated in their contracts. “My children are complaining, especially the one in grade 12 because she will be writing her matric soon and I cannot transfer them at this stage of the year,” Ndlovu said.

A teacher, who asked not to be named out of fear of being victimised, confirmed that Supreme teachers were not being paid their full salaries.

“Teachers are not getting paid. It’s been two months now. They have been paying us R1 000 instead of our normal pay,” the teacher said.

[pullquote]“We were supposed to sign a paper saying even if they were to pay us R50, we would still teach.”[/pullquote]Three other teachers, who resigned from the school because of not being paid, agreed.

One of them, who asked not to be named, said on July 17 the teachers at the school had a meeting and they decided to give the school management a letter demanding all the money owed to them.

“But the next morning when we arrived there was a security guard at the reception. We were told not to go to the staff room or to the classrooms.”

She said they were told to wait at reception, then called into the manager’s office one by one.

“We were supposed to sign a paper saying even if they were to pay us R50, we would still teach,” said the teacher. She refused to sign the contract and left the school on that day.

When Wits Vuvuzela went to the school, management refused to give their names: “Just refer to us as ‘the school management team’,” they said.

The management team said they had never received a complaint from a parent and were shocked by the allegation that they had no teachers.

They said they had replacements for the teachers who had resigned. They asked Wits Vuvuzela about its sources.

“These faceless people are making all these allegations all of a sudden. Why do they come to you? Why not to us, or the CCMA [Commission for Conciliation, Mediation and Arbitration] or the department of education? In fact why not go to a reputable newspaper?” said one of them.

The teacher who is still at the school said he was shocked the school was facing financial difficulties because it received a government subsidy. However, the school was closed for almost a week in April because they had failed to pay the rent.

She said the school had lost its subsidy because it received a less than 54% pass rate and they were now dependant on parents paying their fees, which some were not doing.

Management said publishing the article in Wits Vuvuzela would ruin the lives of other students.

“We have more than 20 students who come through these gates every year to learn for their studies. You are just spoiling this process. We don’t want to sit in court and start suing each other,” she said.