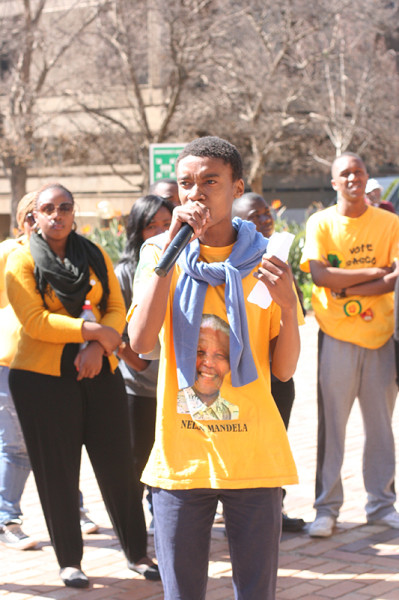 Progressive Youth Alliance candidate Mbe Mbhele telling students at an SRC election circus about everything the SRC has done for students, including arranging buses to Bree. Photo: Sibusisiwe Nyanda

The university has “in principal” agreed to provide “buses not just to Bree but other appropriate destinations to facilitate student movement,” said deputy vice chancellor of finance and operations, Prof Tawana Kupe. According to Kupe this will be implemented next year, once everything has been worked out.

According to an SRC report the buses will go to Bree, Noord taxi ranks, Park station and South Point buildings in Braamfontein at night.

The university has also agreed that international students will only have to pay 75% of their tuition upfront.

The university registrar, Kirti Menon, confirmed that Wits had again “in principal” agreed to let international students pay only a fraction of their fees upfront.  SRC president Sibulele Mgudlwa (@Sibulele_) said the SRC proposed that students pay 60% upfront but management suggested 75% upfront and the rest by the end of March.

Wits vice chancellor Prof Adam Habib (@AdHabb), said they had to ease into this because if done suddenly the university could get into financial trouble in January or February.

“What we’ve agreed to do is try and make it easier for international students, to have to pay all of the 100% of the fees upfront is difficult,” said Habib

Habib said getting money from students is not the only thing that matters but when the money comes in, it is important as well. He said they hope to get more international students so that this does not have an impact on the cost structure of the university.

Habib said the finance department is modelling a new structure of how international students can pay their fees.