An “art activation” against private security on campus and a t-shirt painted with the words “Fuck White People” has led to a human rights complaint against a Wits student,a protest and a social media storm.

Protesting against the presence of security personnel and the financial exclusion of students, Zama Mthunzi, a scholar in the Science faculty decided that he would protest artistically by painting on his t-shirt the words “Fuck White People”.

He wore the t-shirt for a week, resulting in a photo of him making the rounds on the social media platforms.  Mthunzi then received a call last weekend telling him there was a complaint and he would be appearing in front of a hearing set up by the South African Human Rights Commission (SAHRC).

By the time Monday came around, a protest was being held in solidarity with Mthunzi. His fellow students and comrades from the #FeesMustFall movement argued that the taking of Mthunzi in front of the SAHRC was a way of “silencing him” and an attempt to “police Black anger.”

T-shirts with various slogans ranging from “Fuck White Privilege” to “Fuck Patriarchy” graced the front of the Great Hall Piazza on Monday afternoon.

Images of the protest were put up in an album on the Wits Vuvuzela Facebook page and what followed was a debate of epic proportions. As of press time the album had been shared more than 2 000 times and drawn almost 500 comments.

The comments moved between being about whether or not the act of the students was necessary, if their cries were valid, if blacks can be racist, what this meant for the right to protest in the university, to racist slurs, threats of rape and violence and insults that were aimed at the students and other commenters on the album on Facebook. The level of vitriol led Wits Vuvuzela to take the unusual step of moderating comments.

SAHRC spokesperson Issac Mangena confirmed that a complaint had been levelled against Mthunzi. “The complainant is requesting that we investigate the possibility that the writing on the t-shirt could be hate speech,” Mangena said.

However, there is a mystery about how and when the complaint was laid. Mangena confirmed that was laid to the SAHRC on Monday afternoon. But Mthunzi said that on Saturday he received a phone call notifying him that a complaint had been made against him “through the university”.

For its part, the university released a statement on Monday afternoon saying that “apparently” a complaint had been laid.

“We are not sure who laid the complaint with the SAHRC,” read the statement.

The university has maintained it was not involved in the SAHRC complaint and said they had previous matters against Mthunzi and other students relating to vandalism that the university will investigate internally.

Mthunzi said the phone call he received left him more questions than answers.

“Thing is he acted like he’s from the university, to say the complaint was laid via the university. But the university also doesn’t know … When I went to Legal Office they told me ‘hai, we know about these things’ but they were speaking to me about things from other cases, not this one,” Mthunzi said.

Regarding the commission’s investigation, Mangena explained that the commission was not at liberty to divulge who the complainant is.

“We are not at liberty to divulge the names of complainants unless they go to the media to inform them they have lodged a complaint with the SAHRC,” Mangena said.

Mangena said the commission would follow the normal process that’s followed in their investigations.

“We will receive the complaint, assess it to decide whether to investigate or not, then get submissions from the parties before a preliminary report is sent to them. We will release the final report to the public.”

In the end, Mthunzi has a complaint against him at the Human Rights Commission, the hearing hasn’t happened, investigations are underway and the debate burns on. 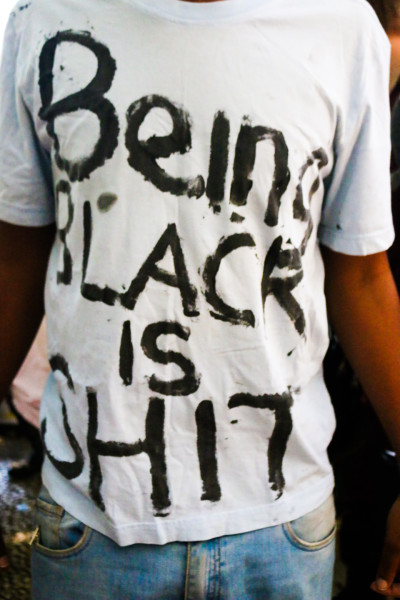