The topic about Transformation in South African Universities emerged early this year when UCT students called for the removal of Cecil John Rhodes statue. However, it has spread through various issues such as transforming the curriculum and lack of black academics. 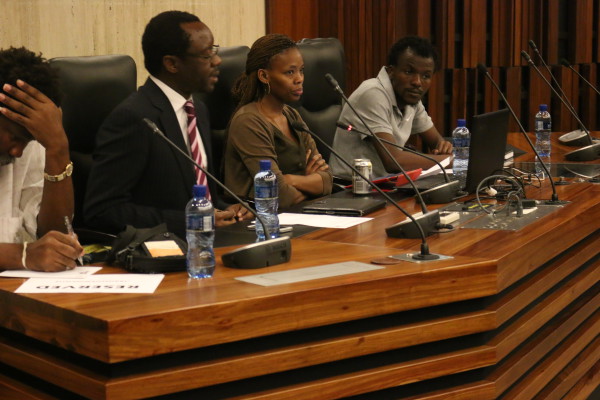 Panel discussion that was held last month by the Transformation Office. The discussion was centered around the Diversification process of Wits Academic Staff.
Photo: Anelisa Tuswa

ONLY one in every seven academic staff members at Wits University is a black African from South Africa according to information provided by the Wits Transformation Office last month.

By contrast, almost half, about 47%, of South African academic staff are white.

Prof Tawana Kupe, the Wits deputy vice chancellor overseeing transformation, said the university’s transformation problems were not obvious ones such as an incident where white students at the University of Free State made a video that depicted the humiliation of black cleaning staff .

Rather, the race and transformation issues facing Wits and other universities was “a reflection of a structural problem,” Kupe said during a recent talk hosted by the Wits Transformation Office.

He added that the problem of transformation was also “an indication of subliminal racism”. “Nobody tells you to go away,” Kupe said, “but you do not feel comfortable being in that space.” The issue of the lack of transformation at tertiary institutions is back in the spotlight and at Wits University with many students calling for change and worrying about their careers as black academics.

Thato Masiangoako, of Transform Wits, told Wits Vuvuzela that the lack of black academics in higher education “speaks to some of the structural challenges that face black people within academia”. “It reflects the wider structural challenges faced by black students who often don’t even have the luxury of choosing academia as a career path.”

Masiangoako believes this was “because the demands of having to provide (for family needs) makes the workplace far more attractive”.

Bandile Ngidi, MComm student, self-identifi es as a potential future academic but is wary of the challenges he faces. Ngidi believes an academic career cannot compare to a job in the private sector. “Considering the issues of black tax and the chances of a slighter, quicker career progression in the private sector.”

Ngidi adds that “mentorship and supervision”, is another stumbling block to potential black academics. “Sometimes I feel like we not being mentored by supervisors who are interested, or experienced enough to explore some topics,” he said, adding as an example race issues.

In the discussion hosted by the Wits Transformation Office, Nontsikelelo Sondzaba, a lecturer in the Faculty of Health Sciences, told the audience about her first day as a black lecturer at Wits. “I was mistaken to be somebody’s secretary,” she said.

Sondzaba told Wits Vuvuzela that “transforming an institution cannot be reduced to running a one man show,” and that “each and every one of us has a role to play.”

“Student experiences must be constructive such that, as graduates, they consider Wits as one of the preferred employers,” Sondzaba said. Kupe told Wits Vuvuzela that the university has various programmes to try and address issues of transformation and this includes the Vice-Chancellor’s Employment Equity Fund.

“We used that (fund) to hire people [from designated groups] who are highly qualifi ed,” he said. Another measure involves ensuring that when people retire, half of those spaces is reserved for the appointment of black academics. Athi-

Nangamso Nkopo, a Wits Masters’ graduate did not find the lack of black academics shocking but rather “unacceptable”. “Transformation isn’t slow at this rate, as we are so often told,” she said “It is deliberately hindered.”