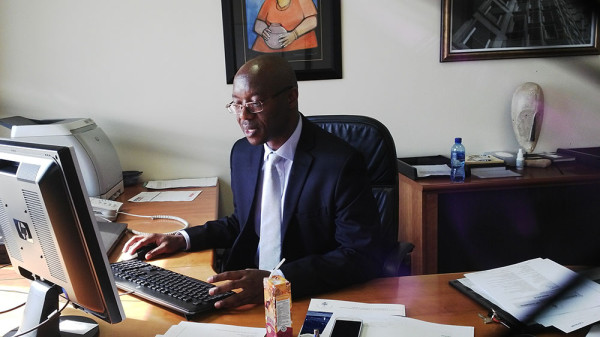 REGULATION WAR: Deputy Vice-chancellor Tawana Kupe outlines effects the new immigration regulations will have on the functioning of the university.
Photo: Palesa Tshandu

SOUTH Africa’s new immigration laws have left international lecturers in a regulatory crossfire creating a headache for universities across the country.

A researcher at the African Centre for Migration & Society (ACMS) Roni Amit said the new laws have created less flexibility for lecturers who are currently working in the country under the exceptional skills visa.

The critical skills visa would require individuals to submit the work they have done to support the claims of their qualifications including a published list of their skills, said Amit.

This means that foreign lecturers without doctoral degrees will not qualify for this visa “unless they fall under one of the other published categories of skills”.

This could make the transition from researcher to lecturer more difficult, according to Amit.

“We are opposing the law, but while we are opposing it we actually have to obey it,” said Deputy Vice-chancellor Prof Tawana Kupe.

Kupe said Wits had co-ordinated a meeting together with the Department of Home Affairs with 26 human resource officers from the country’s universities. They met to discuss the new laws and express their frustration with the laws, Kupe said.

The university has taken measures to ensure the government is aware of the implications the new regulations will have on how the university functions.

Dr Ufuoma Akpojioi, a lecturer in the media studies department who is originally from Nigeria said the new regulations are “strange” and make it difficult for his family to visit him here.

According to Amit, aspirant researchers who want to complete a doctoral or post-doctoral degree in South Africa will also be affected by the new regulations.

Overstaying your welcome in the country could result in being declared as “undesirable” meaning that individuals could be banned from the country for one to five years, said Amit.

“I was in Italy and the United Kingdom recently and all South Africans expressed their concern – there is a lack of faith in home affairs’ efficiency,” said senior lecturer in Italian studies Alida Poeti.

However not all international lecturers will be affected by the regulations as “it depends on what permit they have”, said Kupe.

Head of International Office Gita Patel will be responsible for organising international staff members with the eligible paperwork.