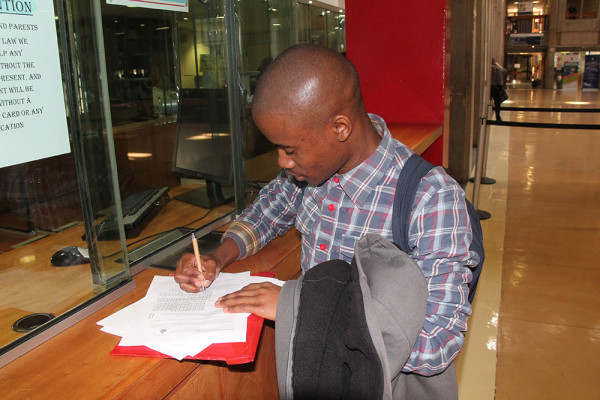 SHOW ME THE MONEY: Wits students can start saving for next year as there is a proposed increase to the upfront payment fee. Photo: Luca Kotton

Witsies are going to have dig deeper into their pockets in 2015 with the proposed upfront payment fee increasing to  R10 270.00.

The fee, currently at  R9340.00, entails a R930.00 increase which is needed by Wits according to university registrar, Carol Crosley. “The universities costs at the beginning of the year are very high,” she said. Crosley added that the registration fee was needed largely due to the department of higher education only providing a portion of their funding at the beginning of April every year and the rest during the start of September.

The SRC (Student Representative Council), though believes the fee is too high and remains opposed to the proposed increase. Shafee Verachia,  SRC president said, “We are in the process of doing extensive modelling to see what the process of that upfront payment purpose is and our opposition is that it is to exorbitant and should remain the same. Relative to our peers the upfront fee payment is ridiculous.”

Students on bursaries would have their registration fees waived if a letter by the donor was received by Wits and would then be expected to pay the full tuition fee by 31 March.

Professor Tawana Kupe, deputy vice-chancellor (finance) of the university, told Wits Vuvuzela that the “university finances are stable but the university does not have the funds to do everything it wants to do.”

Typically the upfront fee payment increases by the agreed percentage fee increase for the following academic year, which needs to go through various structures and be approved by the university council, the higest decision-making body in the university.