Having a WALE of a time

THE Wits Arts and Literature Experience (WALE) started on Wednesday and will continue until Saturday May 12.

The festival is a major event on the university’s calendar and features “the best that Wits has to offer in dramatic arts, film, music, literature, theatre, dance and more”, according to the WALE website.

The theme for this year’s affair is “90 years of creativity” to tie in with Wits’s birthday.

Events will take place in and around a number of venues including the Library Lawns, Great Hall, Atrium, Wits Theatre, The Nunnery, Mafika and Apolonia.

Wednesday’s highlights included the Vagina Monologues and the WALE parade.

More information and the event’s schedule can be found on the website www.wits.ac.za/wale.

Published in Vuvuzela Print Edition, 11 May 2012 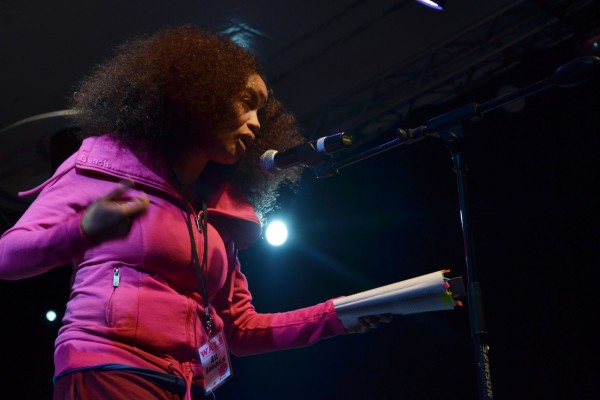 SHOCK TACTICS: On the opening night of WALE, Jamaican poet Staceyann Chin shocked and regaled the audience on the library lawns with excerpts from her book, The Other Side of Paradise – A Memoir. “How are the men handling?” she laughed, after a detailed extract about getting her first period. “If you’re next to man hold him – he’s having a hard time. And not the kind he’s used to.” Chin’s work has been published in the New York Times, the Washington Post and the Pittsburgh Daily. She also appeared on the Oprah Show, where she shared her experiences of growing up as a lesbian in Jamaica, which is also one of the main themes of The Other Side of Paradise.