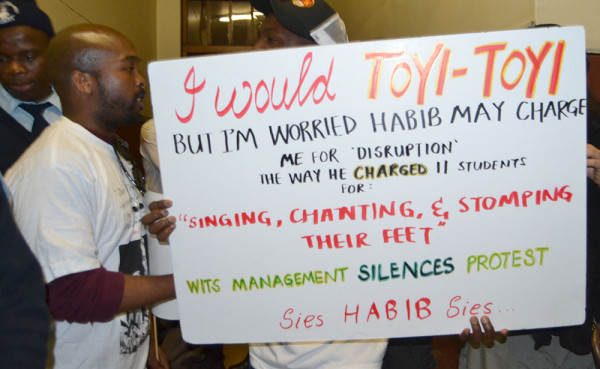 I WON’T BE PUNISHED: Tokelo Nhlapo, one of the Wits 11, is fighting his sentence of 130 hours of community service. Image: File

UPDATE: Tokelo Nhlapo has confirmed via Twitter that he received 130 hours of community service and not 80 as reported in this article.

The identity of this student was not known to Wits Vuvuzela previously. We apologise for the error.

Some members of the “Wits 11” – the students disciplined last year after they disrupted a concert by an Israeli pianist – have agreed to accept their punishments, in spite of declarations to the contrary.

The Wits 11 were charged and found guilty of misconduct for interrupting a concert by pianist Yossi Reshef, as part of a pro-Palestinian protest, and were ordered to perform 80 hours of community service.

Tokelo Nhlapo and Pearl Pillay told Wits Vuvuzela the Wits 11 were united in opposition to their sentences. Pillay said the Wits 11 were not going to comply with the sentence because the ruling was “unfair”.

However, Wits spokesperson Kanina Foss said Wits 11 member Apelele Pindani had already made arrangements with the office of the vice chancellor to complete her prescribed community service.
If Pindani did not, she “will not be issued a certificate of good conduct”, which was necessary if the law student wished to practice in the legal profession, said Foss.

Contacted by Wits Vuvuzela, Pindani declined to comment on her own punishment, but confirmed the Wits 11 were divided over complying with their punishments. “Some people have complied and some people haven’t complied with the requirements of the sentencing.”
Foss said the university expected the Wits 11 to comply with their sentences before they finished their degrees. “The university would expect the students to complete the community service as soon as possible, but definitely before they complete their studies.”
But Pillay said she did not believe refusing to complete her community service would hinder her graduation. She said the judgement against them did not state that non-compliance would mean they could not complete their degrees.
Nhlapo told Wits Vuvuzela the 11 were pursuing every option available to continue to fight the sentence. He said they were in contact with a Constitutional Court judge, who was willing to review their case.
“We are not prepared to do business with Zionists who kill Palestinian women and children.” Nhlapo said the university had used a policy dating from 1988 to charge the Wits 11. He believed the ruling was illegal and unconstitutional in the new South Africa.
Nhlapo, Pillay and Pindani were SRC members when they protested the pianist’s appearance in 2013. Other SRC members Sibulele Mgudlwa, Joy Phiri, Tasneem Essop, Justice Nkomo, Klaas Mokgomole and Norman Mashegoane as well as Wits students, Mbuyiseni Ndlozi and Feziwe Ndwayana, were also found guilty of misconduct for their part in the protest and all were ordered to perform 80 hours of community service. 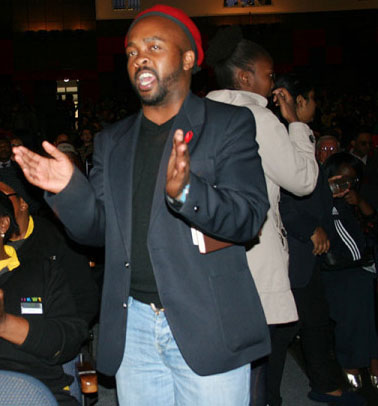 THE ELEVEN charged Wits students have raised concerns about the chairperson presiding over their disciplinary hearing.

“The chairperson was appointed by the same vice chancellor who is prosecuting us,” said SRC secretary Tasneem Essop.

“The vice chancellor is a player and a referee. It doesn’t make sense. How can you charge students then decide who the judge is,” said SRC international student affairs officer Pearl Pillay.

He said the recommendation was made because of the case’s “potential reputational risks and the need to ensure a fair, transparent process.”

Habib said the committee holding the hearing was independent and its decision could be reviewed and appealed by a committee appointed by University Council.

The students were charged with contravening the university’s code of conduct after they disrupted a concert by an Israeli pianist during a protest for Israel Apartheid Week in March.

The 11 charged students have resigned to losing the case. They said the hearing process was biased and fraught with double standards and inconsistencies.

SRC president Sibulele Mgudlwa said: “The judge was frustrated and disallowed our lawyer from getting instruction from us. Our lawyer was scolded and shouted at but when the same behaviour was showed by the prosecutor, it was ok.”

Essop told Wits Vuvuzela the venue of the disciplinary hearing was moved without the charged 11 students’ knowledge. She said they were scolded by Woodward when they arrived late at the new venue and were not allowed to explain why they were late.

Habib confirmed the inquiry venue was changed but said the SRC’s legal representative team was made aware of the change.

Essop and Pillay said the judge was “extremely patronising” and treated the charged 11 students “like children”.

“We got a gag order for tweeting. The university threatened to charge us with more misconduct charges. What is the university scared of?” said Essop.

Pillay said the charged students were ordered not to tweet during the trial after Deputy Vice Chancellor Prof Yunus Ballim was offended by something he saw on twitter.

“The next day, the prosecutor printed 68 pages of our tweets. The judge asked us not to tweet. We wanted the media to know,” said Pillay.

Habib told Wits Vuvuzela Woodward decided a “trial by media” was not best for the circumstances “given the manifold and diverse interests in the case”.

He said while the media wasn’t allowed to attend the inquiry, “there were no objections should the student wish to comment to the media outside.”

SRC president Sibulele Mgudlwa disputes this and said the accused students wanted the media to be present.

“We made calls for the media to be there and for the trial to be public. The university and the disciplinary hearing presiding officer [Woodward] has rejected our calls.”

Mgludlwa said they [the students] haven’t laid a formal complaint against the university but “we might be writing a letter of complaint to the vice chancellor” depending on what their lawyer advises.

The trial of the 11 Wits students will resume August 13.