New project aims to bring sexual health education to the youth in social media platforms they engage with the most.

The online platform was launched to address the need for sexual health education, which was interrupted by the pandemic and led to fewer sexual health events being hosted in-person.

The digital platform was launched “to keep Knowledge Unzipped active and [to] engage with the people who need it most, on the spaces that they engage with most,” said Kashifa Adams, a member of the DFL.

“Because of everything that has been happening in the world, we’ve had to rethink how we interact with people,” said Adams.

Although the online platform was launched, the in-person interventions will not stop. Instead, Knowledge Unzipped will be a blended project done both online and through school interventions.

Although the main focus of the project was primary and high schools, DFL also hosted Sex Sports, an event that is held annually on campus to commemorate World Condom Day.

In these games, it was discovered that many students at Wits cannot, or do not know how to use a condom properly.

“We saw the need to go into reses [residences] and see how we can use Unzipped to engage with the information we come with. As much as the program was designed for schools, it was a need in reses,” said Lehlohonolo Dube, a member of DFL.

According to sister Simangele Sitoe from the Wits Campus Health and Wellness Center, many students are open to talking about sexual health, and are well informed on the topic. However, interactive programs like Unzipped remain important, as they further emphasized the issues.

END_OF_DOCUMENT_TOKEN_TO_BE_REPLACED

Celebrating 30 years in new partnership with Drama for Life END_OF_DOCUMENT_TOKEN_TO_BE_REPLACED

Drama for Life pays tribute to the victims of violence across Africa.

“147 is not just a number”. These are the words that were uttered by Faith Koli, a journalist from Nairobi, at an event hosted by the Drama for Life (DFL).

AFRICA UNITE: DFL and students commemorate victims of violence in Rwanda, South Africa, and Kenya at a meeting on Thursday. Photo: Michelle Gumede

The DFL held the event on Thursday to commemorate the 21st anniversary of the 1994 Rwandan genocide, the recent Kenya University attack and the xenophobic attacks in South Africa.

DFL invited three former Wits students, from different African countries, to tell their stories of each of the issues above. According to the director of DFL, Warren Nebe, the aim of the event was to reflect on these incidents and to heal.

On April 2, Garissa University College in Kenya was attacked by Al Shabaab militants and almost one hundred and fifty people were killed.

The theme for the meeting was #WhereAreOurLeaders, and the  governments of the different countries were blamed for inaction..

Theodogene Niwenshuti, a Rwanadan genocide survivor, recalled how his father, amongst hundreds of people from his village, was killed: “I forgave the people but I still struggle to forgive the government, for it failed us.”

His father was shot in front of him during the Rwanda genocide.

Sibongile Bhebhe, a woman from Zimbabwe, talked about her experiences of xenophobia in South Africa.

Esmeralda Cloete, an Honours student in Drama Therapy, told Wits Vuvuzela that the experience was “deeply touching and piercing,” she said.

“It questioned one’s objective in the world, it spoke to humanity.”

The event ended with a candlelight service during which all these incidents were reflected on deeply. 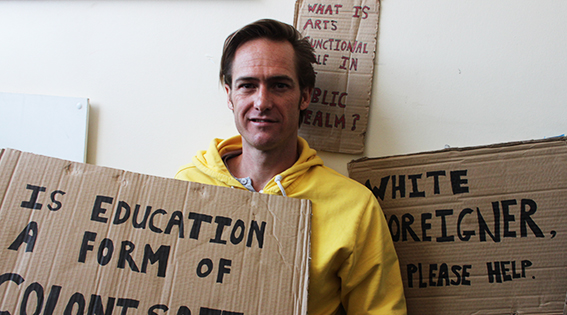