No more funding for recreational clubs 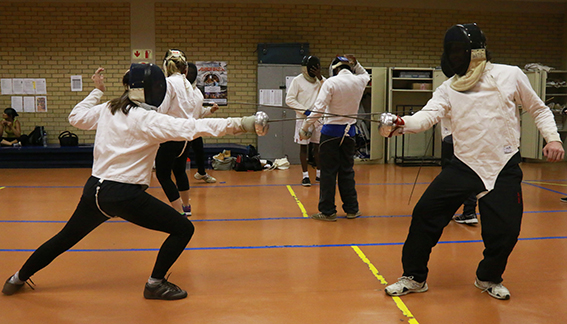 IN PANIC MODE: The Wits Fencing club is now expected to dig deep into their own pockets for maintenance costs among others. Photo: Nqobile Dludla

The Wits Fencing Club was shocked late last year when they were notified that they will no longer receive their yearly budget due to changes rolled out by Wits Sports this year.

Wits Fencing Club chairperson Natalija Cerimaj was told that all recreational clubs have to be either financially independent or merge with an outside club.

The Wits Fencing Club is one of many recreational clubs who will no longer receive financial support from Wits Sport unlike the top five clubs (rugby, hockey, cricket, football and basketball) categorised as high performance.

“Last year we thought we’d get here in Feb and get a little bit more money, [but] no. We were told you’re fine with what you have, work with what you have and re-allocate your funds into a certain direction,” said head of Wits Sport Adrian Carter.

He said that Vice Chancellor Prof Adam Habib had told Wits Sport to pick a few specific sports “you want to be known for”.

“We start competing in the next two or three year cycle. Easier said than done,” said Carter.

“The intention is not to take anything away from any codes.”

According to Carter Wits Sport is introducing a revitalized Wits Sport mandate where more focus will now be placed on development and performance in order to boost a competitive edge in the top five clubs.

“We want our football club to go and take part at Varsity Sport and actually make it to the semi-finals. But to do that, if I have four injured footballers they can’t just sit on the side of the field not being able to afford physio or a sport scientist.”

According to Carter, the yearly budget given to clubs is being “wasted” by clubs, such as Wits Fencing, who are given a budget for University Sport of South Africa (USSA) but end up not competing. So from this year, clubs have to submit a report to prove they are “high-performing” in order to get financial support.

“We paid an athletics coach for cross country and there was an amount for USSA. Both those totals come up to just a shy of R50 000. The team didn’t even go to USSA, money wasted and yet football has had to grovel for money to take a crappy bus to go and qualify for varsity football.”

According to Carter, Wits Sport asked for funding from the university to supplement its own reserve budget but received nothing.

Not only are we now expected to pay our own bills, we are expected to maintain our own facilities and try and help students,” Carter said.

Recreational and competitive clubs will still have funds from their reserve accounts and receive funds from membership fees.

According to Carter Wits Sport is doing everything in their financial power to generate funds in order to assist other sport clubs. This will be done through Wits Sport’ commercial initiatives.

Wits Sport’ Kitchen was recently launched in March. The aim is to give services to sport facilities and conferences with a double turn over by the end of 2015 estimated at R3 Million.

Wits Sport is also hoping to draft an annual USSA hosting plan, where Wits is hoping to accommodate players and generate an income stream of about R1 million.

In addition, the new Technogym which will be up and running by March next year will generate a profit share of R1.5 Million.

In the mean time sport clubs have to raise their own funds through hosting of USSA tournament, merging with other external clubs or go independent.

While the emphasis is placed on high performing clubs, recreational clubs like Fencing are feeling the blow.

“We had a coach who was paid by wits, we had enough money from Wits admin to pay him and he could come on a weekly basis now we have to pay him out of or own pockets from what we have from our reserve. We can’t afford to pay him on a weekly basis so we’re trying to arrange with him that he comes to coach bi-monthly and not weekly,” said Cerimaj