THE Progressive Youth Alliance (PYA) and African National Congress Youth League (ANCYL) have denied allegations that they paid social media personalities to influence the 2018 Student Representative Council (SRC) elections.
The allegations emerged in an amaBhungane report published on Friday, March 1, which claimed that social media personalities, paid to tweet promotional content and known as ‘influencers’, may have been employed to sway elections in the ANC’s favour.

The report listed last year’s Wits SRC elections as a possible case. The 2018 elections resulted in the PYA winning 12 out of the 13 SRC seats.

Ncapayi’s Twitter account indicates that on October 16, 2018, she tweeted in support of the PYA and urged her followers to follow suit.  She tweeted that she had voted for the PYA, even though according to her LinkedIn profile she graduated in 2017, making her ineligible to vote in the 2018 SRC elections.

A screenshot emerged on social media during the 2018 SRC campaign of what appeared to be a post by well-known social media influencer, and Ncapayi’s boyfriend and business partner, Karabo Motsoane, in a Wits campaign WhatsApp group: “Afternoon guys. So as some of you might know, SRC elections are underway. And PYA are asking for us to. Promote gor the for 3 days. They’re paying R100 a day.”

The Wits PYA queried the authenticity of the WhatsApp screenshot and the time and tweeted a statement that read: “We would like to clarify that the below screenshot and alleged campaign/WhatsApp group have not been commissioned, endorsed or agreed to by the PYA.”

SRC deputy-president Nkateko Muloiwa said it would have been impossible for the Wits PYA to have paid any social media influencer to tweet in support of the party.

“We cannot get access to cash, as everything has to be approved by the internal financial structures of the university.

“We never paid anyone, and anyone who says otherwise is living in a fool’s paradise,” he told Wits Vuvuzela.

Final-year BA student and Wits EFF member, Duma Nkabinde, said that he found claims that there were paid influencers believable.

“I’m convinced that, yes, the PYA uses characters who seem apolitical on their social networks but have a large following, to influence young people in spaces of higher learning,” he told Wits Vuvuzela.

FEATURED IMAGE: Wits PYA members who were voted onto the SRC in the 2018 elections have denied that they paid social media influencers to swing votes in their favor.
Photo: Provided

This week the Wits EFF caused a stir when they criticised the university  for shifting its’ responsibilities to the the SRC and have called for ‘no SRC’.

“The university does not listen to students so the SRC is a body that is meant to legitimise the university because the statute requires every institution of higher learning to have an SRC,” said Wits EFF secretary Mbe Mbhele.

“We feel like at Wits it is just there so that university can be a legitimate body but it does not necessarily change anything. It is also strategic move on the part of the university because they are always shifting responsibility.”

Mbhele made his comments to Wits Vuvuzela on Tuesday afternoon shortly after Wits EFF stopped the election debate by singing and toyi-toying on the stage. The debate was called off and a fight broke out between members of Project W, Progressive Youth Alliance and the Wits EFF on the Great Hall stage.

Mbhele said Wits EFF would continue to protest the SRC campaign and prevent the elections from taking place.

“We are going to go there and kick the ballot boxes and the IEC is not going to be able to count the votes,” said Mbhele.

Mbhele said the university has relied heavily on the SRC to help students through initiatives such as One Million, One Month, a fundraising drive for students who did not receive funding the National Students’ Financial Aid Scheme at the beginning of the year.

Mbhele said that the university should pay for student’s fees and accused it of paying bonuses to “[Vice Chancellor] Adam Habib and his minions.”

Mbhele said the lack of bus services for Wits students to taxi ranks at Bree and Noord were one example of how the SRC was unable to serve students.

“The bus issue has been raised in 2005 and in 2015 students are still complaining about the bus, 10 years later,” Mbhele said.

Mbhele said Wits EFF will use any means possible to force Habib to take their demands seriously.

After all that was said and done, Mbhele concluded the interview with these words “fuck Habib”. 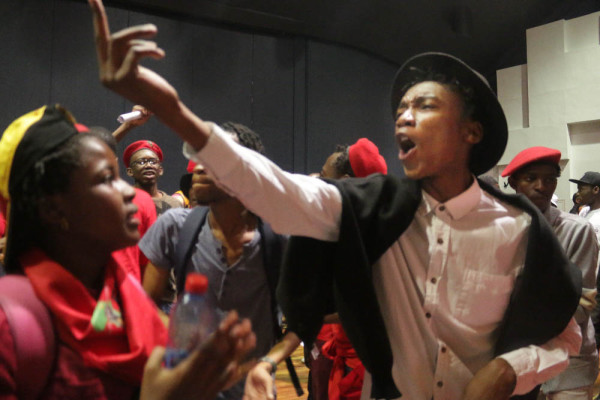 Wits University has confirmed that it is investigating another member of the Student Representative Council (SRC) following a series of accusations on social media and media enquiries.

“The university can confirm that legal proceedings are indeed underway against another SRC member, following incidents which occurred last year, before the member took office,” the university said in a statement.

“These proceedings are being adjudicated by an independent student disciplinary committee and an outcome is expected in the next few months. The university’s management has no control over these proceedings. However, once a decision is made, the university will act accordingly.”

The Wits Progressive Youth Alliance (PYA) had sent a number of tweets asking why no action had been taken against the SRC member as had been done with the dismissal of former SRC president Mcebo Dlamini.

We call on @WitsSRC to clarify us on whether one of their members is charged with sexual harassment or rape?

We find it concerning that there are allegations against an SRC member from Project W. These are unconfirmed but still worrying..

The university said the raising of the matter was “political opportunism” and would not be pressured to act “outside of its normal procedures in response to this opportunism.”

The University has received multiple queries from the media and social media pertaining to the status of another disciplinary hearing involving a member of the Students’ Representative Council (SRC). We understand that this matter is being raised as a result of political opportunism to force the University to act beyond its boundaries. The University will not act outside of its normal procedures in response to this opportunism.

However, the university can confirm that legal proceedings are indeed underway against another SRC member, following incidents which occurred last year, before the member took office. These proceedings are being adjudicated by an independent Student Disciplinary Committee and an outcome is expected in the next few months. The University’s management has no control over these proceedings. However, once a decision is made, the University will act accordingly.

All student disciplinary matters are dealt with in terms of the policies and procedures of the University, which apply equally to all students. The University acknowledges that these procedures generally take too long to reach a conclusion and management has been authorised by Council to look at ways to expedite these processes without compromising the disciplinary processes.