END_OF_DOCUMENT_TOKEN_TO_BE_REPLACED

A gang of men have been involved in a number of “snatch and goes” in Braamfontein’s Bertha and De Korte streets over the past two weeks.

Wits Security and Liaisons manager, Lucky Khumela said he is aware of a “gang of men” in the area who are attempting “snatch and goes” on vulnerable targets.

“We have seen a rise of this type of crime where the opportunists will either distract the person and pick-pocket them or just snatch their visible valuables.”

The most recent attack was on Sunday morning when a male non-student was robbed by two men.

“They stole his wallet and cell phone. Our security was informed and subsequently SAPS was called,” Khumela said.

This followed other attacks, the first of which was on August 15 when a a female Witsie was approached from behind by a man t while outside the KFC on De Korte street .

“It was broad daylight. The man snatched my phone from my hands and jumped into a car that had a group of men in it who just drove away,” the woman told Wits Vuvuzela.

Last Saturday, a Wits student’s phone was snatched from her by “a guy who then got into his car that was parked nearby and drove off”.

On Monday, Wits Vuvuzela was approached about attempted car thefts on Bertha street by a security guard who asked to remain anonymous.

The security guard said there was a gang who keep trying to break into cars and steal them while parked in the area next to the Wits Art Museum.

“I tell people who park there to tell the guard to watch their cars and to give him pansela. There have been so many attempted break in’s. These men keep trying to steal the cars and nothing is being done to stop them.”

Khumela said this was the first he had heard of this problem but insisted Campus Control would get to the “bottom of it”. 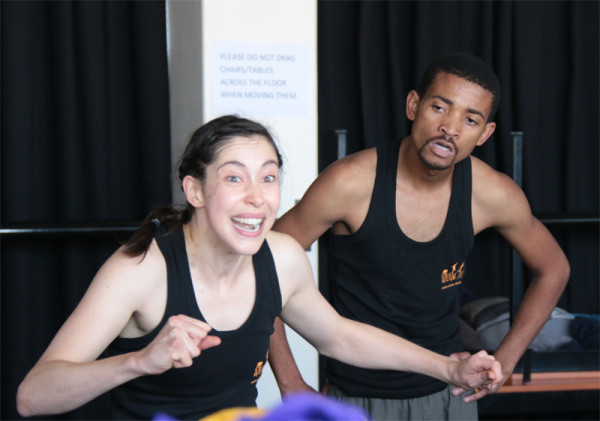 EVOLUTION IN MOTION: Liesel Retief (on the left) and Pro Mchunu (on the right) are two of three actors who were part of the Walking Tall physical theater play. The third actor was Lesego Gladwin Molotsi (not pictured).
Photo: Luke Matthews

Drama for Life Town Hall presented a performance of Walking tall  a physical performance play about the origins of the human race on Monday, April 7 at the Yvonne Banning studio.

Walking tall is a Paleontological Scientific Trust (PAST) core educational program based on the origins of Africa and the earth. The aim of the campaign is to develop Africa’s rich heritage and promote interest in the origin sciences.

Pro Mchunu, Liesel Retief and Lesego Gladwin Molotsi were the professional actors who performed on Monday in the Yvonne Banning Studio at University Corner.

The performers agreed that they got along, Mchunu said “We have to because in physical theatre we have no sets or props, we only have each other.” According to Retief, the response from the audiences is positive. She said, “A girl came up to us and said that she learned more from watching the show than from reading it.”

They started rehearsals in January, and were already performing the production by February. They travel throughout the country and other countries in Africa performing for school children and students.

Walking tall has been seen by over 1 million university students and school children around the Africa over the past 13 years. The science of the origins shows the shared African roots of all people. PAST uses Africa’s ancient heritage to build African pride, promote community spirit, social unity and environmental conservation. They also want to get the youth of South Africa interested in science that will lead to a strong African presence in the field.

After the performance there was a question and answer portion where the actors explained the scientific terminology used in the play. They also answered questions from the audience, giving the show an educational and entertainment feel.

The overall message of Walking Tall is that human beings share the same origin and we share a genetic bond that can not be broken.