Wits Music students hosted a free concert at the Great Hall, singing against the recent spate of violence that has erupted across South Africa.

“Our country is going in the direction it is because our nation needs healing” said lead vocalist Kamohelo who performed all six songs performed at the concert.

“Music has the power to transcend boundaries and we need to stand together to heal our people.”

Kamohelo sang Ti Nailo with the production cast of Yerma. A production running at the Wits theatre, directed by Rajesh Gopie.

Ti Nailo is arranged by Wits music student, Jermaine George. “The piece signifies a cry of pain and a yearning for something” said George.

According to Kamohelo, performing with the cast of Yerma was important for symbolising unity. “Music has the power to transcend boundaries and we need to stand together to heal our people.”

The lunch-time concerts are hosted for free every Wednesday by Wits music school. The next concert will be on April 29th where Josh Turnbull (BMus II) will be playing a smooth saxophone. Bass guitarist Nhlanhla Ngqaqu (BMUS II) will play on May 6. 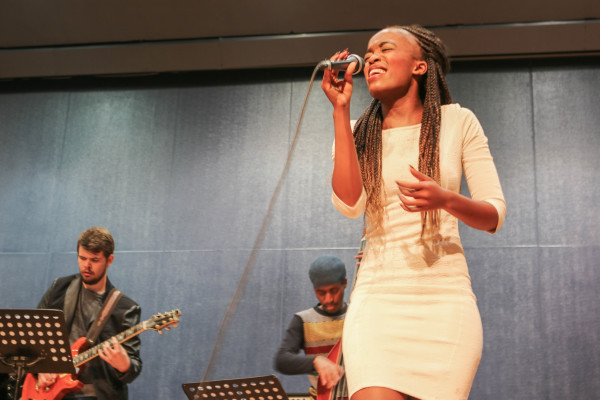 WITS MUSIC & THEATRE: A free concert at the Great Hall took place in support of the victims of violence and abuse in South Africa. Photo: Michelle Gumede