Feminist writer, social activist and tattoo enthusiast, Lebohang ‘Nova’ Masango is a widely revered poet. Her avid interests in the way human beings create meaning and also relate to each other led her to doing her Honours in Anthropology. 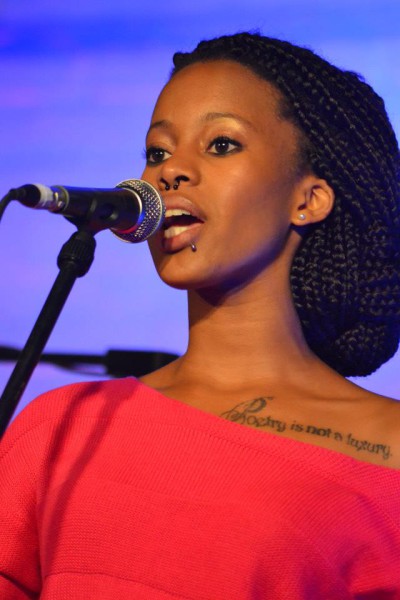 NOVA ON THE MIC: Lebohang ‘Nova’ Masango is a believer in the power of words; she can be seen devoting her words on stage with her healing and emotionally charged poems. Photo: Provided

Why did you choose to call yourself ‘Nova’?

My name ‘Lebohang’ is a very common name so I just wanted to create something unique. There was this one gallery in Newtown called the ‘Afro Nova’ and I had a big afro at that time so I decided ‘cool, I’ll just call myself Nova’. And when you think about the meaning Nova, it meaning a big, powerful explosion on a star also speaks to how I like to imagine myself.

When did you fall in love with poetry?

What cemented my love for poetry was seeing Lebo Mashile on this programme called Latitude in my teens. It was her being a visual anthropologist, basically, traveling all around the country and engaging with different peoples’ ways of life. She’d end each episode with a poem and it always blew me away. What it conveyed is that poetry is an invaluable way to tell stories and to narrate the lives of the marginalised. I also used to hang around in Newtown a lot when I was in high school, so I would just go a lot of poetry performances.

You are part of Rookie Magazine writers, how does it feel to work for a magazine that is directed at aiding teenage girls, worldwide?

Rookie Magazine is truly fantastic. It’s just about making teenage girls’ lives easier and it’s full of advice and experiential essays on everything from the politics of the day to sex, music and book recommendations. What happens often is that teenage girls are dismissed as irrational, hormone-crazed and indecisive. I believe that the teenage period is important because that’s when you begin to critically construct who you become for the rest of your life. It’s rare that teen girls are given a space within media that centres them completely and affirms them in all their complexities.

What is the Zazi Campaign, and why is sexual health education important for young women?

The Zazi campaign is a positive media messaging campaign for young women specifically about sexual health. It is important because there’s a lot of messaging out there that says ‘don’t do this, don’t do that’ and what Zazi is doing, is affirming the positive in its programming: do use double contraception, do use a condom and birth control, do get in touch with your local practitioners for regular check-ups. We travel all over the country and hold educational sessions as well.

How does Lebohang Masango juggle her school work and everything that she does?

Well the truth is I don’t [Laughs], I really don’t know how I do it, but the only thing that gets me through is that I say ‘yes’ to everything. And it’s not the healthiest thing to do because I don’t have time but for some reason it works. I really don’t have any kind of formula but I work hard to make those ‘yeses’ work for me.