The editor of London’s Sunday Times Insight team opened the 2015 Power Reporting Conference by reflecting on one of the most controversial corruption stories in the past year. Speaking in front of a packed auditorium at Wits University, Jonathan Calvert recounted the intricacies of an undercover investigation with fellow journalist, Heidi Blake, that resulted in an expose of bribery and coruption at Fifa, the world football authority.

The pair went undercover in 2010 to investigate alleged corruption that surrounded 2020 World Cup-winning bid from Qatar.

Going undercover has become a crucial tactic in investigative journalism and has enabled more stories to materialise successfully.

Calvert and Blake who were tipped off by an insider, decided to go undercover and pose as lobbyists with interests on behalf of the United States. 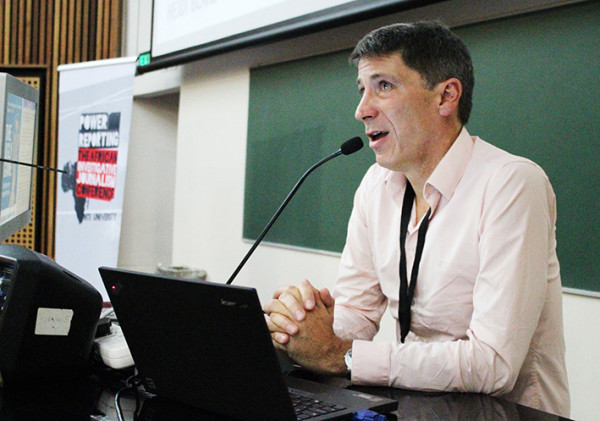 UNDERCOVER: Jonathan Calvert, editor of the Insight Team at the Sunday Times, was the keynote speaker at the opening session of the 2015 Power Reporting Conference in Johannesburg. Photo: Reuven Blignaut.

Kitted out with minute cameras hidden in their clothing, the pair recorded meetings with six people on the bid committee. They formed part of the discussions on how to structure the campaign to lobby for support for the American bid. Eventually, two of the committee members (voters), agreed to “sell their votes”.

Calvert said that each World Cup brings in approximately four million pounds but added that, “We don’t know how they spend their money or where it goes to.”

With corruption presenting itself at the outset of their investigations, the pair pressed on and eventually presented their findings to Fifa which did not act on the allegations.

Calvert said when Qatar was announced as hosts for the 2020 soccer World Cup, “It was a surprise to everyone, but not really a surprise to us.”

Calvert said he feels that Fifa is “burning itself to death at the moment,” and has a strong feeling that “a big revelation” will be made public by February 2016 by journalists in the US who are continuing the investigations.

The pair have since co-written a book on their expose called The Ugly Game: The Qatari plot to buy the World Cup.