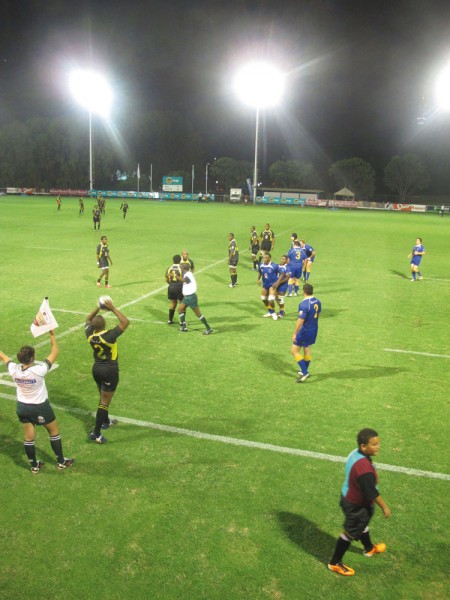 THE WITS KUDUS returned to the top of the Varsity Shield log after beating the University of Fort Hare Blues 22-13 at the Wits Rugby Stadium on Monday.

Both teams started the game at an intense pace and the Blues had a chance to take an early lead, but flyhalf Qondani Katywe missed a very kickable penalty. Wits regained momentum and after good work from centre Heinke Hartegen, speedster Riaan Arends burst through a gap to open the scoring for the home side. Brandan Lizamore converted to take Wits to a 7-0 score line.

Things took a turn for the worse for the Blues when Katywa received a yellow card for dissent. With a man advantage in the backline, Wits started running the ball more, with the back three looking particularly dangerous. The ball was moved wide as often as possible and a sweeping counter-attack resulted in a second try for Wits. After good interplay, scrumhalf and skipper David Turnball gave a great offload in the tackle to release Nkuli Gamede. The conversion was missed but Wits had a 12-0 lead.

Wits had to dig deep for the remainder of the half and produced some brilliant tackles, pinning Fort Hare further back and forcing them to kick possession away too often. Arends then produced the moment of the match as he gathered the ball on the halfway line. He broke two tackles, then chipped the ball twenty metres, gathered possession again, and dotted down for one of the tries of the season. Fort Hare scored late in the half to bring the score to 19-7.

Fort Hare were definitely the better team in the second half. When they came out they were more aggressive and ran the ball more. Two penalties brought the game to 19-13 and Fort Hare grew as the game went on. Lizamore slotted a penalty to increase the lead, but it should have been wider as Wits turned down two very kickable penalties in pursuit of another try.

In the end Wits held out, but will need to be more clinical when on top and more composed when under pressure in their next games.