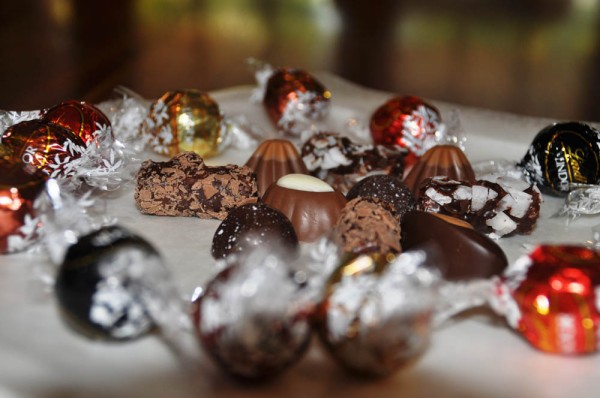 CHOCOLATE is a word that melts in your mouth. It is a word that can brighten any woman’s day. And as we all know: “Life is like a box of chocolates…you never know what you’re gonna get.”

Lindt recently opened their chocolate studio in Johannesburg. The store at Design Quarter in Fourways represents Lindt in every way. The studio is the first of its kind in Johannesburg, it is shiny, new and, best of all, filled with chocolates.

Lindt’s Chocolate Studio (Johannesburg) opened in November 2010, joining the studio in Cape Town. There you will find Lindt’s chocolate bars and truffles as well as some extras such as cookbooks, starter kits and fondue sets.

What comes as no surprise is that the ladies of Wits love their chocolate. Danita Da Costa, an economic science student, and Jacqueline Cameron, an actuarial science student, both fall under this category.

Da Costa had heard of the studio and plans on going there when she has the time. Cameron had not heard about it but said she will definitely go there.

“We must do an excursion there one of these days,” Da Costa jested.

Boikanyo Tseukudu, a bachelor of arts student, is keen on breaking the stereotype that only women love chocolate. He had not heard about the studio but said he would go there.

The studios offer 12 workshops, including chocolate appreciation and cake creation & décor, by renowned pastry chef Dimo Simatos who has worked in elite restaurants locally and internationally.

The golden bunny from Lindt acts as a sign that Easter is near. The bunny is a well-known tradition and was born in 1952 when one of the Lindt maîtres chocolatiers saw a rabbit in his garden. His son was so intrigued by it that when it ran away he started crying. His father decided to make him feel better by making a milk chocolate rabbit with a golden bell attached to its neck so his son could find it again.

Lindt chocolate was developed by Rodolphe Lindt in 1879 and described as the world’s first real melting chocolate. Since then Lindt has provided its customers with the finest chocolate, adding some interesting combinations along the way, like  sea salt and chillie chocolates.

Someone once said: “A balanced diet is a chocolate in both hands,” and “If at first you don’t succeed, have a little chocolate.” Lindt has taken these quotes to heart.