FNB Wits annihilated FNB UKZN 51-5 on Monday night at the Wits Rugby stadium to give the boys in blue a great chance of qualifying for the playoffs.

The Witsies gave their best performance of the season and showed quality throughout. Physically, they were too imposing up front, kicking out hand they were too accurate, running the ball they were too slick and finishing off possession they were too clinical. The away side never really had a chance.

After a scrappy start from both teams, Wits were the first to settle and scored after only 10 minutes through man-of-the-match eighth man Jason Fraser. The try was converted by the excellent Brendon Lizamore and the home side never looked back.

The pressure was relentless from the home forwards and the kicking out of hand was deadly accurate. UKZN could rarely get near the ball and if they did, a massive tackle or lack of numbers resulted in constant turnover ball.

One such turnover resulted in the second try of the night as Wits winger Nkuli Gamede kicked a loose ball ahead and chased it down to extend the lead. Lizamore converted and the game was effectively over.

After constant pressure and possession, Fraser dotted down once again and a hiding was already on the cards. With the crowd baying for blood, Gamede scored his second and clinched the bonus point just before the half time hooter. A slick run and off-load from flanker Clayton Allem set up Riaan Arends to canter home under the poles.

A yellow card for Lizamore minutes before the break was the only blemish on an otherwise perfect half for Wits. The result was never in doubt; the only question was by how much the home side would win.

The UKZN Impis scored a try early in the first half that proved nothing more than a mere consolation. Wits had switched off for the first 10 minutes of the seconds half, perhaps becoming complacent. UKZN were the better side in the second period, but could not break down the Wits defence. 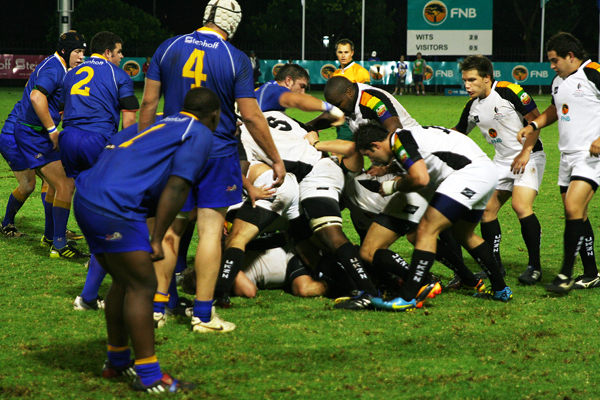 Wits started to get into the half after 30 minutes and scored their fifth and sixth tries in quick succession and hardly let up physically. The visitors in their frustration then resorted to dirty, with late tackles, back chatting to the ref and punches being thrown. It was more a compliment to Wits then a reflection on UKZN as it was all the away side could really do. One more try from front rower Katlego Kgame just before the final whistle allowed the conversion to bring the score past 50.

Wits now go into the crucial away game in Bloemfontein against CUT high on confidence and know that even without a win they should still make the playoffs. However, if Wits can go to the Free State and take revenge for the home loss to CUT earlier this season, they might just cement a home final. With the recent home form being what it is, that prospect certainly looks enticing.