ARRIVING safely and on time at their destinations is a daily concern for Wits students who use taxis to get to and from the university due to financial constraints.

“Will I get to my destination?” is a question first year accounting sciences student, Tsholofelo Masilo, says he asks himself constantly.

“When they said Wits gives you the edge, I never thought it would be on the edge of the taxi seat.”

Another commuter, Bonolo Mophosho, describes taking a taxi as “a leap of faith”.

As academic success is the sole purpose of them commuting in the first place, time is also a factor that weighs heavily upon the students. 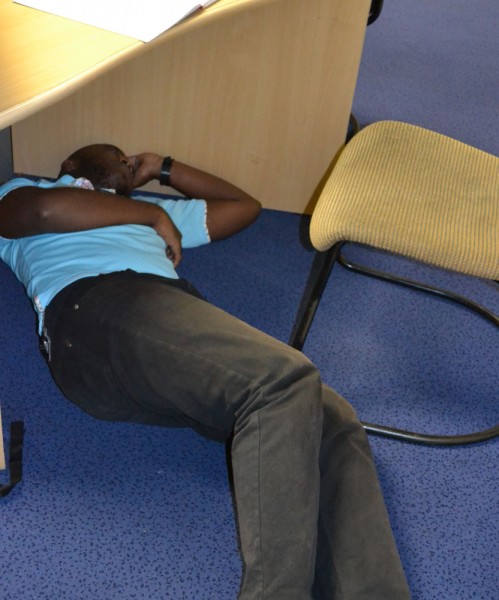 BETWEEN A DESK AND A HARD PLACE: Thami Zondo on the floor that was his bed for two weeks. Photo: Anelisa Ngewu

“The travelling impacts my studies negatively. I could achieve more marks if I stayed around,” says Bonginkosi Mthombeni, who lives in Vosloorus and spends up to 4 hours a day in queues and on the road.

On a good day, he sleeps for a maximum of four-and-a-half hours.

Female students are especially concerned about safety, claiming they are targets for crime.

“They think we’ve got money,” says Thembisa resident Gugulethu Baloyi, who once narrowly escaped being robbed.

“I don’t feel safe at all. We’re victimised because we’re women,” says Baloyi, referring to a girl who was raped at the Noord taxi rank some time ago.

Thembelihle Tshabalala, who commutes from Meadowlands, says the Mandela Bridge is the worst.

Some students stay at home voluntarily, however.

“It’s more comfortable at home; someone cooks and does the laundry,” says BCom economics and finance student, Mokhele Tsotsotso.

Regarding his motivation for the daily commute, Masilo says it is knowing that though he might be a “slave” now, he will be the “master” later. “I wouldn’t trade it [coming to university] for anything.”