A Braamfontein parking system, implemented by Ace Parking Services in December last year, now requires motorists to pay upfront for parking on the side of the road. 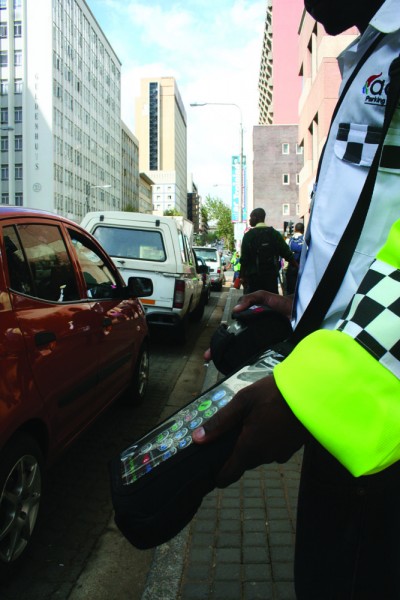 MONEY CHANGING HANDS: Motorists in Braamfontein will now have to pay an upfront rate of R3.75 minutes if they want to park on the side of the road. Photo:Brendan Roane

Ace Parking marshal Matthews Magaga said the kerbside parking costs R3.75 for 30 minutes and motorists are only allowed to park fora maximum ofone to two hours, depending on the road.

Former computer auditing student at Wits, Yalli Kopele, who was parking on Jorissen Street for the first time since the system was implemented, said “I don’t understand it, we live in a country full of fraud, I don’t trust it.”

She said R3.75 for 30 minutes is “ridiculous” and she will not be using the bays again.

uard who has worked in Braamfontein since 1999, said the new parking system in the area had affected his life.

Nkosi said Ace Parking took away his income. “I now have no job; I don’t even have a grade 7 [education qualification].

Nkosi said he can only work between 8am and 8.30am before the Ace Parking marshals and the Johannesburg Metropolitan Police Department (JMPD) “chase [him] away”.

Owner and managing director of Ace Parking Services, Juliet Paulsen, said car guards in the area were given first preference when her company was hiring marshals.

She said “many have come and many have gone” and believes the car guards were “used to working for themselves and did not like being regulated” by a company.

Nkosi said he was never approached by Ace Parking to work for them and believes the new marshals do not earn enough to make a living because they only receive a 15% commission on the cars they process.

The JMPD can give motorists who refuse to pay an official traffic fine.