It is no April Fool’s joke that Sibusiso Radebe will win himself R10 000 and an Apple Macbook Pro laptop once he finishes his 200 hours of living in a bakkie on Friday, April 1.

Radebe beat four other finalists by more than 900 votes to get a chance to win “The Resident” competition. If he completes eight days of living in the Nissan NP200 bakkie, he’ll win himself the above prizes and bragging rights for setting a new world record. 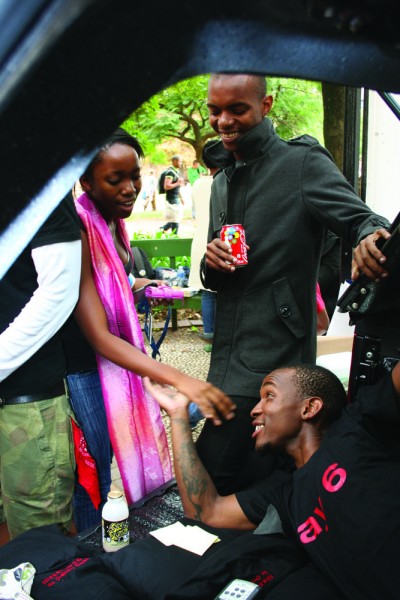 Radebe was given a daily exercise routine of 15 minutes and a medical check-up. He was also allowed to shower daily, have bathroom breaks and 30-minute eating breaks. He was allowed to eat anything and anywhere he wanted – as long as he stayed in the van. “I’ve eaten so many different things in the last five days, some I can’t even pronounce,” he said.

The 3rd year geology student was never without company. He received several visits from family. Fellow Witsies also came in numbers – “especially the ladies”, he said with a grin.

Radebe kept in touch with the “outside world” using his cellular phone and a laptop with internet connection. One of his tasks was to submit a daily blog entry for The Resident website which summed up his activities.

His lectures were recorded for him and his tutorials were completed in the van and submitted by friends.

The heavily tattooed Witsie said he’ll spend his winnings on a music and entertainment business named Silver Spoon Hustle which he’ll co-own with a friend. “I can’t give away too much until the mud is dry.”

The bakkie was parked outside the Umthombo Building, and Radebe was monitored by a security guard.

Musical chairs and an eating competition also took place in the eight days. I-pods were given to the winners.

Sibusiso had just entered into day seven of eight when the paper was due for print.

Check out witsvuvuzela.com for a diary of Radebe’s residency and some pictures of the week and closing party with DJ Crazy White Boy.