Wits makes it to Shield Final

This Monday night, in front of a televised audience, FNB Wits Rugby will face off against FNB CUT for the inaugural Varsity Shield title.

It has been a long, eventful journey but the final match of the tournament is upon us, with Wits earning the right to host the event as a result of finishing top of the log with their rivals from Bloemfontein but with a superior points difference.

The fact that Wits are in the final, let alone hosting it, has shocked many pundits. Wits, a moderately sized, predominantly English-speaking university was not given much of a chance in the competition. According to captain and scrumhalf David Turnbull, this has been one of the side’s main advantages. 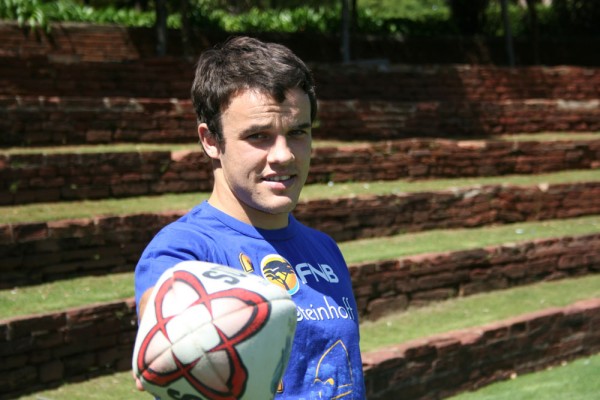 OPTIMISTIC: Rugby captain and scrumhalf David Turnbull has his eye on the prize. Photo: Daniel Gallan

“No one really gave us a chance from the start,” Turnbull said. “But that has worked to our advantage. We have just showed up at every game knowing what we can do, not caring at all what anyone else thought. We are probably going into the final as underdogs again, but it’s worked for us so far.

“We’ve been punching above our weight. We were supposed to be one of the whipping boys of the competition but now we have a chance of playing in the Varsity Cup next season.”

According to Turnbull the reason that Wits have had such an impressive run is because they have been the most complete team in the competition. Wits’s defensive record was the best in the competition, conceding 13 tries, 5 less than CUT. Wits have been outscored by CUT this season but still have the ability to score with the wide ball always posing a threat.

“Defence is not about ability or training” Turnbull said. “It’s about who wants it more, who is willing to put their body on the line. When you hear that everyone has written you off, it just makes you want it more. Everyone in the team plays for each other and knows that everyone else is playing for them.”

Wits lost to CUT in the match at Wits in the league but won in Bloemfontein so the match is, according to Turnbull, “anyone’s to win”.

The match will be broadcast on SuperSport and will be watched by people all over the country. Witsies are encouraged to come and support the team as this will be a massive occasion. The winner of the match will get the chance to play for a spot in next year’s Varsity Cup.

“We don’t feel added pressure. This is just another game,” Turnbull said. “We are more excited than nervous. We are not even thinking about what will happen after the game. We’ll just go out there and do what we’ve been doing all season.”