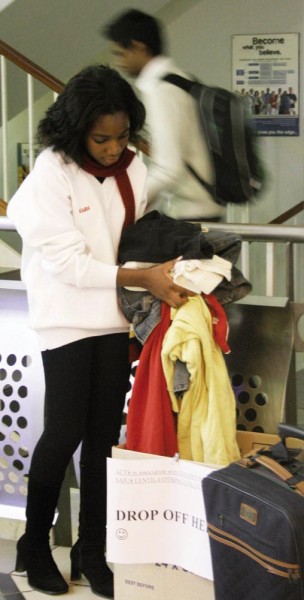 Association of Catholic Tertiary Students (ACTS) at Wits has joined forces with the Golden Key and South African Union of Jewish Students (SAUJS) at Wits on a charity clothing drive on campus.

“The collaboration came about after discussions during O-week. We feel it is better to have bigger numbers in order to have a bigger impact through the clothing drive,” said Victor Ajusi, ACTS chairperson.

Easy access to drop off points and the use of social media networks such as Facebook and Twitter  are part of the strategy aimed at encouraging  students to let go of what doesn’t fit, and donate to the less fortunate with winter at our heels.

“We decided to be part of the charity clothing drive because one of our fundamental principles is to focus on South Africa and the communities in which we live with an interest in charitable events,” said Dina Hendner, national vice-chairperson of SAUJS.

The clothes, books and blankets donated will be given to Holy Trinity Catholic church, which will distribute the donations to homeless people.

Drop-off points will be at all residences on and off campus, OLS Building -outside My Cafe, Matrix-next to the security desk, Education campus tuck shop near the bus stop and at Medical School.