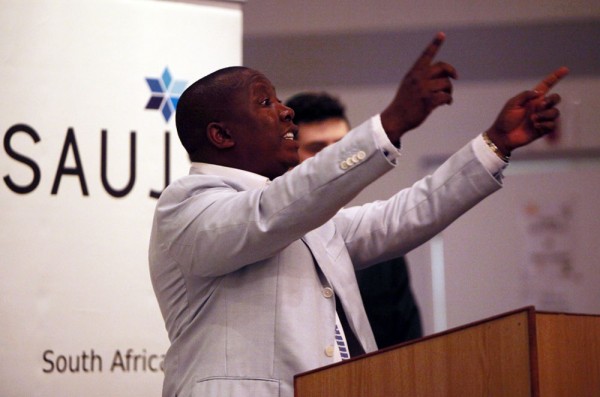 Controversial ANC youth leader Julius Malema is to some extent an enigma in South African politics. Widely known for his outlandish statements and frequent race-related remarks, Malema talks to Vuvuzela about why it is he is so misunderstood after addressing the SA Union of Jewish Students in Cape Town last week.

“I am an activist pursuing the national democratic revolution which aims at transferring power from the minority to the majority. That power is social, economic and political power. That’s who I am. I don’t want to go to parliament; I will go to parliament in 30 years. I believe parliament is for retired people,” Malema says.

Often criticised for living in Sandton while calling for the emancipation of the country’s poor, Malema says where he stays is immaterial to his pursuit for change.

“Who should stay in Sandton?” he asks, “Sandton belongs to all of us who can afford to stay there. Why should it be a criminality for a political leader to stay in Sandton?

The youth leader says he can be an activist from anywhere. “I don’t need to shout for the transfer of power when I am in Alexandra and do it less when I am in Sandton. Our struggle is to take the people out of Alex and into Sandton.

“If we can’t take them into Sandton, then we’ll take Sandton into Alexandra and make Alex a living place with living conditions that are justifiable for human beings to live there,” he says, adding that the ANC did not struggle for people to remain in shacks in rural areas.

Commenting on the debate about the value of his Rolex, Malema says “society wants to engage in that topic when we have so many serious issues in this country. It’s like we are a society who are suffering from a poverty of ideas. It’s like we’re a society that exercises 5% of our minds”.

“We want to discuss what we can see, not what we think. Our society must never be a society that discusses brand names. We must discuss how to liberate our people from poverty, that’s the type of society we need to be.”

Malema says he is misunderstood because he stands opposed to the owners of the means of production.

“They own everything and they understand me but they deliberately distort me because I don’t agree with them. They own the media, they own radios, they own the economy, but I don’t care because when I took up this struggle I knew I would pay the highest price. They are not talking about me, they are talking about their own imaginations, why should I be worried about the imagination of an editor of a newspaper – that’s why they apologise to me week after week.

“We are ridiculed, but we don’t care, what we care about is our people. Do our people appreciate that this is the direction we are taking. Our people don’t read papers, our people rely on their leaders for leadership – they have never elected an editor to lead them.”

Pointing out that the youth has every reason to vote for the ANC, Malema says it is the only political party that recognises women’s rights.

“It is the ANC which has got a cabinet close to 50/50 both male and females. Where the ANC is not ruling in the Western Cape, there is a cabinet that looks like a boys’ choir, women are only recognised through a poster,” he says.

“If you want your fellow South Africans to be built open toilets, then vote against the ANC. A toilet is supposed to be a private place. People in the Western Cape where the ANC is not governing, are going to toilets with blankets. This is an organisation that doesn’t recognise human rights, the ANC has never done that, the ANC has removed people from bushes and put them into houses with decent toilets. They may not look like my toilets in Sandton but at least there is privacy.”

Malema says the ANCYL’s real struggle is over land distribution, unhappy with the idea that “80% of the population owns less than 20% of the land”.

“We want this land, but we are not going to do it the Mugabe way. We want dialogue with those who own the land so that we can live in this country peacefully as equals.”