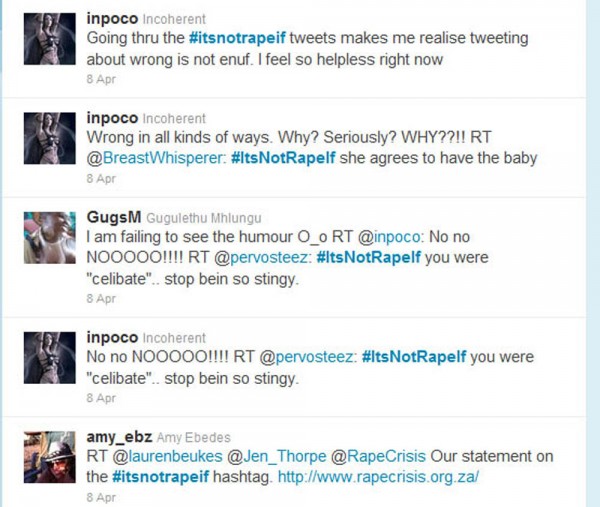 A war of words erupted on Twitter last weekend when the topic #itsnotrapeif was trending in South Africa.

The source of the topic is unknown but rape activists and ordinary citizens challenged the tweets which suggested situations where women should not cry rape  , providing an unconventional but rare opportunity for discourse about this sensitive topic in South African society.

Tweets that caused national outrage included #ItsNotRapeIf “ she`s a lesbian and you wanna show her what she’s missing”, “if her mother is watching” and “if you drop her off at the hospital afterwards”.

The jokes upset many Twitter users who found them to be very insensitive, considering that South Africa has one of the highest rates of rape in the world.

A report on corrective rape in South Africa which appeared in Time magazine last month said human rights organisations estimate that more than 40% of South African women will be raped in their lifetime.

That means of the 15 705 female students registered at Wits for 2011, 6 282 could be raped. That is enough students to fill the Bidvest Stadium and the FNB Rugby Stadium.

Jennifer Thorpe, an activist from  Rape Crisis Cape Town Trust, released a statement condemning the topic, saying “this tag is devastating for the rights of survivors, and fuels myths that survivors of rape deserved what they got,” and restated that “it is rape when consent was not given.”

A majority of the tweets were made by women.

Wits Everywoman society chairperson Tselane Makhetha expressed her disappointment at the women who took part in fuelling the topic, saying: “I think  a lack of self-esteem  leads  women to think rape can be a joke.”

Not everyone was as critical, with some individuals citing that Twitter allows for freedom of speech and the topic was an example.

Blogger Badballie commented, “instead of trying to curtail freedom of speech, start by doing something to the criminals guilty of rape.

“I have a democratic right to voice my opinion, and although I sympathise with those affected by violence, they do not get automatic right to dictate what I say.”

Women24 writer Lili Radloff said that if “#itsnotrapeif she`s a lesbian and you wanna show her what she’s missing” is not hate speech then she does not understand what hate speech is.