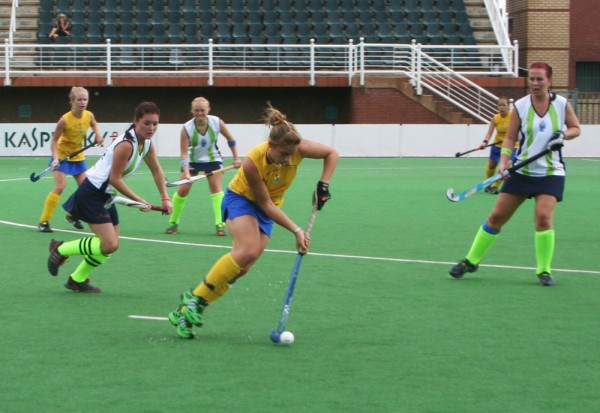 The Wits ladies hockey team beat Vaal University of Technology A side 1-0 in the last 20 seconds of the game on Sunday afternoon.

Both teams had a slow start in this first game of the season. In the first half neither team looked strong enough to win the game. Most of the game was played in the middle of the field with both teams having almost equal possession of the ball.

Wits had numerous chances to put the ball at the back of the net, but the opposition’s defence was airtight. Wits received a number of short corners but were unable to net the goals. Both teams failed to find the back of the net at the end of the first half after a glove save made by goalkeeper, Martene Esteves, who was on debut for the first side.

In the second half, Wits’s attack was stronger than the first half when they took to the field  – goalkeeper-less for the first 10 minutes due to the Esteves’s health problem. Wits continued to attack strongly, dominating the opposition’s half and controlling much of the game. The Wits centre link and captain, Jules Cass, was instrumental in keeping the game in VUT’s half with the help of right link Priantha Reddy.

Wits was given a penalty after a scuffle in VUT’s circle. Cass flicked her penalty stroke wide off the posts with 15 minutes left on the clock. The game was set to end on a goalless draw after numerous short and long corners. A moment of sheer opportunistic brilliance saw Demi du Toit run a free hit from outside the circle and pass the ball off to Jaime Martin who deflected a goal 30 seconds before full-time to win the strongly contested game.

The Wits team bagged three points on the log to start off their season.

The Wits men’s first team was thrashed 9 -0 by Wanderers, a team that has won the Men’s Premier League for four consecutive years.