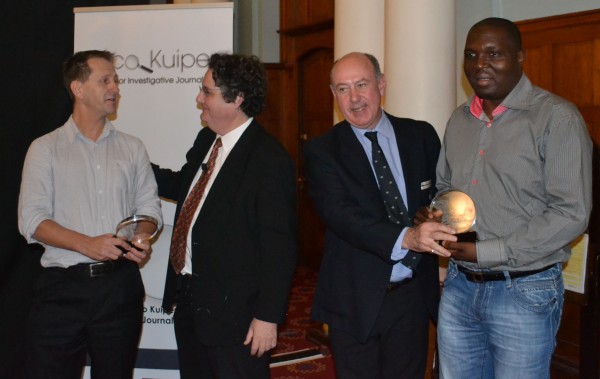 THE Sunday Times and The Times won the 5th Taco Kuiper Awards for Investigative Journalism for the year 2010.

First prize went to Mzilikazi wa Afica and Stephan Hofstatter for their story on Police Commissioner General Bheki Cele and the SAPS building lease, which focused on the Police Commissioner’s influence in a R500-million lease deal with businessman Roux Shabangu without a proper tender process.

Sipho Masondo of The Times took second prize for his series of articles exposing governmental negligence in mining and the resulting impact on the environment.

“I’ve always wanted to tell things as they are; not how management wants. In journalism, I have the opportunity to [do this],” said Masondo, who hails from a public relations background.

And so he did, when he wrote one of the articles in the series, that brought to public attention the danger of acid mine drainage from toxic water -during the heavy rain period earlier this year – and the inability for Gauteng mines to pump the water out fast enough.

Wa Africa’s efforts landed him in jail last year when, along with Hofstatter, he wrote the article that exposed Cele in the police headquarters lease deal scandal.

“I was very impressed with the work I’ve seen. It was phenomenal work and brave too [as journalists are exposed to] political pressure.”

Editor and publisher of Southern African Report and former deputy chairman of the South African chapter of the Media Institute of Southern Africa, Raymond Louw said “[It was] absolutely well deserved and totally appropriate”.

According to Mail & Guardian editor, Nic Dawes, Wa Africa and Hofstatter’s story “had to win” as it was the story of the year.

“[The win was] very richly deserved.”

Antony Altbeker, who was the first Taco Kuiper Award recipient, added that as an environmental story it was great to see Sipho win.

“I’m getting married in November, so the money will come in handy,” said Masondo of his R100 000 prize.