A look at political parties before you go to the polls

WITH upcoming elections, you might be asking: Why should I vote and who should I vote for? This is what the main parties are promising. 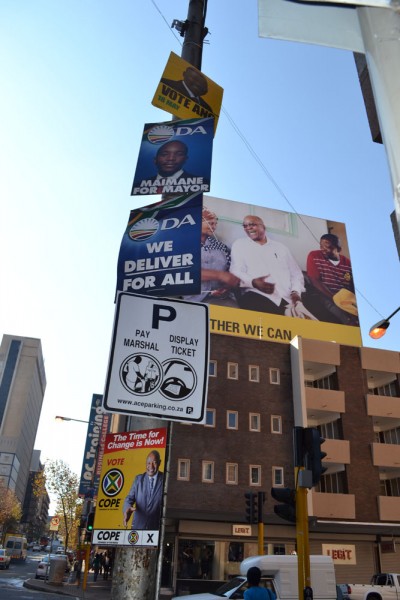 African National Congress (ANC)
Parks Tau, the expected mayoral candidate, recently said on 94.7 Highveld Stereo that he would ensure that government workers are held accountable.
In their manifesto, President Zuma states: “Our manifesto is affordable, realistic and achievable. It draws from our experience in government.”
The ANC is promising to create 4, 5-million work opportunities, to expand youth programmes as well as housing opportunities.  You can find the manifesto on www.anc.org.za.
The ANC’s campaign has been affected by controversies such as the DA exposing their open toilet saga in the Free State and Julius Malema’s recent statements about “whites” stealing land from black South Africans.

Democratic Alliance (DA)
Wits DASO chairperson, Nazley Sharif, says, “This election offers voters, especially the youth, the chance to make a change and bring a better life to the place where you live.”
Sharif says they are committed to creating an environment for job creation, assuring students of future jobs.
With regard to students, Sharif says, the DA Youth will take proposals on how to reform the National Student Financial Aid Scheme (NSFAS) and they are lobbying to scrap VAT on textbooks.
The DA built open toilets in Makhaza, Cape Town, which started the string of open toilet exposés between the ANC and DA.
The mayoral candidate for the DA is Mmusi Maimane.

Congress of the People (COPE)
COPE’s 2011 manifesto says: “Our responsibility is to ensure that the vision of a new South Africa that the People’s Congress had, will be translated into reality in 2011.”
Along with a comprehensive list of other goals, COPE will promote the following:
“The interests of children, persons with disability, youth, women and older people in every ward by ensuring that ward committees have sub committees to cater for these groups.
Appointing professionals to improve productivity and guarantee service delivery.”
COPE’s reputation has been compromised by its leadership squabbles between its founders, ANC defectors Mosiuoa Lekota and Mbhazima Shilowa. Former COPE youth leader, Anele Mda, recently returned to the ANC and said that COPE had no political vision.
Cope’s mayoral candidate for the elections is Preddy Mothopeng.

Inkatha Freedom Party (IFP)
According to its manifesto the IFP believes that “local government must work for you and with you in all that it does”. Their logo is “It’s about you!” and the IFP states that their councillors will “be a person of integrity, be accountable to you and be available to you at all times”.
Other aims include stopping corruption and prioritising spending on infrastructure and basic services.
As with Cope, the IFP was affected by the defecting of their former national chairperson, Zanele Magwaza-Msibi, and others who went to the NFP.
Their mayoral candidate for Johannesburg is Mzwabanzi Ntuli.