‘Peeping Tom’ gets knickers in a knot

A ‘Peeping Tom’ in one of the university’s female bathrooms has got staff and students into a lather.

“A male Peeping Tom / thief has been caught in the ladies toilet on several occasions,” reads a sign on the South West Engineering ground-floor toilet door. 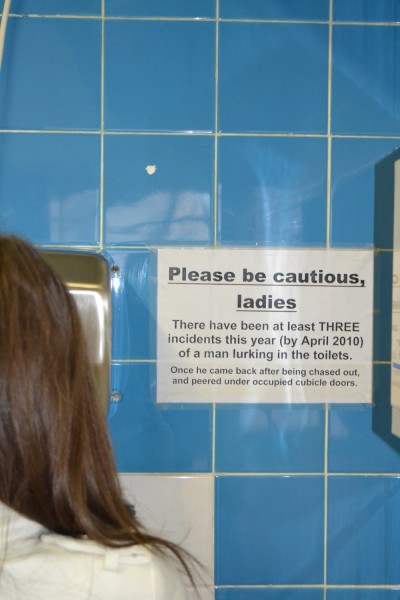 Caution: A poster warning females in the OLS bathrooms

Staff and students spotted the intruder mostly around the time of the Wits Arts and Literature Experience (WALE).

In one incident, a faculty of humanities admin assistant said she was in the toilet after work when she heard one of her colleagues shouting, “Ha! Ufunani? (What do you want?)”.

According to the colleague, who would not be named, she caught the offender on the floor, peeping into the cubicle through the opening at the bottom of the door.

“I shouted for security,” said the colleague.

Upon Campus Control’s arrival, one guard had closed the building’s main door, while another pursued him down the stairs into the basement to find one of the old doors open.

“I don’t think even the securities knew about the door,” said the unnamed colleague.

Some staff and students said the sign had scared them.

“He could be a rapist,” said African Centre for Migration Studies (ACMS) communication officer and former UCT student, Sharon Olago, who said she had been exposed to many accounts of rape in the institution’s toilets.

A Zimbabwean post-grad student who admits to an intense fear of being raped, Gillian Chigumira, shared this sentiment, stating, “You should [be able to] just go and do your ‘business’ feeling free.”

“I thought, ‘Who is crawling on the ground of a dirty toilet trying to put his face under the door?’

“It must be someone very desperate to see some vagina.”

Similar posters have also been spotted in Senate House and the Oppenheimer Life Sciences building since last year.

According to Campus Control head, Robert Kemp, a suspect has been arrested.