‘A dog’s breakfast of toxic gruel’

Opponents of the Protection of Information Bill raised their voices once again and marched from Wits to Constitution Hill on Saturday August 13.

The march was organised by the Right 2 Know Campaign, a nation-wide coalition that opposes the “Secrecy Bill” in its present form. The protesters gathered at Wits Great Hall, and the march followed a presentation by high-profile speakers who addressed a large audience in the morning.

Cosatu president, Sdumo Dlamini said the congress of trade unions rejects the bill in its current form because it represents a “threat to South African democratic society to be fully informed on matters of public interest”. He explained the bill could be used to cover up information on corruption and criminalise whistleblowers, affecting particularly workers and trade unions.

Dlamini also emphasised all kinds of secrecy must be challenged “not just secrecy by government, but by all the institutions entrenched in our lives, including those in the private sector”.

Nadine Gordimer, Nobel Prize winning writer and political activist, spoke about the statement she delivered with André Brink to President Zuma in July on the Protection of Information Bill. “Not even an acknowledgment was received from the presidential office… Into the trash can,” she added.

Former Minister of Intelligence Ronnie Kasrils delivered a heated speech and stirred up the audience. He said the bill is not just a challenge to journalists but every cross-section of society.

The bill is turning into “a dog’s breakfast of toxic gruel,” he added. 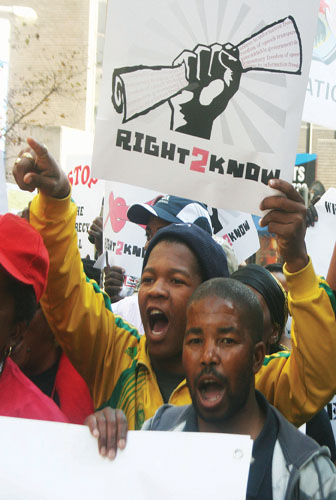 LET THE TRUTH BE TOLD: the Right 2 Know campaign supporters marched to Constituion Hill demanding the 'Secrecy Bill' be changed

The protesters took to the streets of Braamfontein holding placards that read: “Free Press = Free RSA”, “Speak now or forever be gagged”, “No information means no accountability” and “25 years in jail for uncovering corruption”.