Deputy President Kgalema Motlanthe was at the Great Hall on Wedenesday evening for a lecture in honour of struggle icon Ruth First.

Themed ‘In search of an African Foreign Policy’, the lecture was based on Wits associate philosophy lecturer Eusebius McKaiser’s research on Libya, as the 2011 Ruth First fellow.

McKaiser is the world debating champion, an Oxford graduate and a regular commentator on South African media and politics.

Ruth First Trust recipient Lisa George, from Jeppe Girls High School, spoke about First’s contribution to society as a young Jeppe girl and also touched on the values that had motivated her throughout her life.

A photo exhibition of Anton Hammerl’s last filed photographs from Libya before his death, were on display.

Wits Journalism’s head Anton Harber spoke about Anton Hammerl and the role of photojournalists in the media industry.

“The largest category of journalists who have lost lives on the job are photo journalists,” Harber said, adding that “war photographers can only do their job with great risk”.

Hammerl’s daughter and father were present to listen to McKaiser’s research findings on Libya’s and South Africa’s foreign policy strategy for the sole party country.

“South Africa needed to express a clearer view on [their position with] Gaddafi…We are not, but the world thinks we are, propping up Gaddafi” said McKaiser.

“South Africa doesn’t fully appreciate the importance of investing fully in our foreign policy,” saying that lack of investing in a quality international relations policy would have “repercussions on our internal matters”.

He concluded by saying, “We must urgently invest in the AU (African Union). If we don’t then I’m afraid ‘African Solutions for African Problems’ will like its cousin – ‘African Renaissance’ – be a dustbin filled of promises”.

Former Robben Island prisoner Ahmed Kathrada said he found the lecture “most interesting, educational and informative. It was well prepared”. 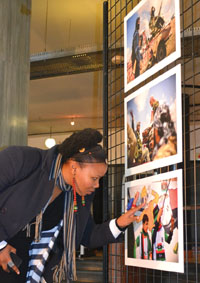