CROSS DRESSING: A day in the shoes of a woman 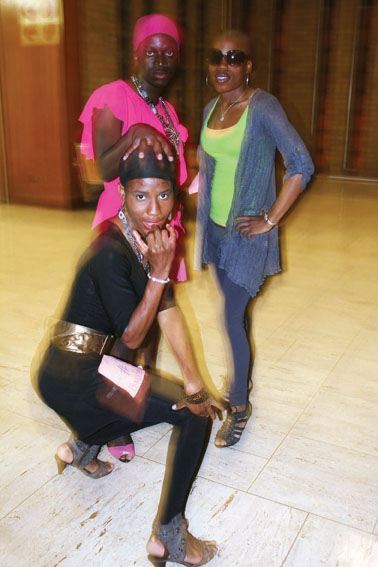 CROSS DRESSING: To celebrate Women’s day, boys became women and wore female suit and personality to honour women. Fighting for number one spot for Miss Esselen residence, Eric Makgasela (crouching), Prince Masimula and Hangwani Thilivali (from left) were amongst the contenders who made the audience laugh out loud (lol).

Boys became women in a pageant that celebrated women’s month at Esselen Street Residence this month on the 13th.

Male students wore make-up, tight dresses, high heels and modeled. They flaunted their accumulated curves and hot bodies as they danced the night away.

The aim of the event is to celebrate women through laughter and entertainment, not to conform to the formal ways of dinner parties and high tea. The event has become a tradition as it also takes the stress away from books.

Two non- essellen residence females felt, the guys who were modelling overdid it when it came to their ‘sexy’ moves. “It was traumatising. It’s not how women would handle themselves.”

They believe the essence of the event is to honour women but what they got was defying.

1st year law student, Bheki Makhubu, said, “The modelling part for the purposes of entertainment was okay, but for me as a guy, seeing man do that was defying.”

This event has widened since its inception, and has moved away from the idea of it being merely about men putting on female identities, says Esselen hall co-ordinator, Clifford Chauke.

“We motivate and encourage the gay community to come out … we embrace them and also the [beauty of women] and everyone irrespective of each and everyone’s sexuality.”

Not a lot of men have the courage and find humour in wearing a female suit. Academic officer/student developer, Masego Dihele, said some of the guys who refused to participate “are embarrassed to be seen looking like women.”

“I did not enter because as a dignified, respected individual I can’t be seen modelling in woman suit,” said Makhubu.

Dihele hopes that guys who participated “got a sense of how it’s like being a woman.”

2nd year Law student, Klass Mokgomole said, the idea behind him entering this pageant is “not to win but for girls to enjoy the day through laughter”.

SRC nominee, Hangwani Thilivali said we enter so that we can “feel and understand what it’s like being a woman and also to honour all ladies”.

The male participants who entered were surprised at what they took away from the experience. Brainwasher said, “I have learnt that getting ready as a woman takes a lot of time. It took me 30min in front of the mirror rather than the 5min that I take on a daily basis.”

Thilivali said the pageant is also about how “you walk and dress, it’s about being representable, having good communication skills and good choice of words.

The judges on the other hand, thought the male contestant did not effectively fit the shoes of what being a woman entails.

3rd year BSC, Matshego Nkwana, defines a young woman as “a pillar of strength for the one that needs it, a seed carrier, for the world cannot be filled without her. “

Other contestants’ reasons for entering were beyond surface level of entertaining the audience. Vow Fm content production trainee, Neo Mahatelli wanted to appreciate his mother and his 3year old daughter.

“I am 24 years old, have been to three universities, I am living my life for my daughter, building a future for her.”