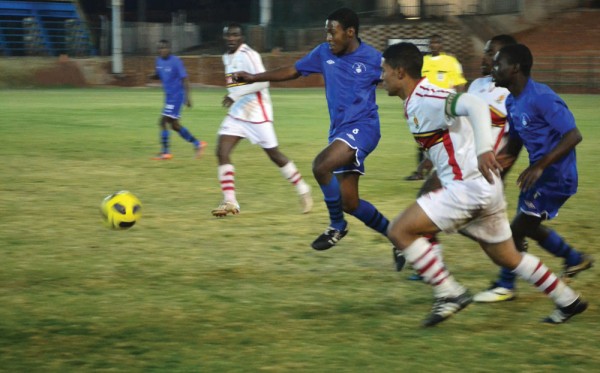 TAKING THE LEAD: Wits forward Bandile Mathandela leads the chase for the ball alongside the Tuks defence.

An exciting game of soccer unfolded at Bidvest Wits stadium on Tuesday night when Wits hosted the University of Pretoria in a USSA (University Sports South Africa )league match, beating the team from Hatfield 3-0.

It may have been a chilly night but both teams entertained the crowd who braved the cold to watch their teams take on each other.

The match began with both teams starting slowly and tight in defence. Wits dominated possession and kept the Tuks goalie awake.

A beautiful team effort and unselfish play saw Ntsika Ngcobo open Wits’s account for the night in the 38th minute, sending the small Wits crowd into a frenzy.

The visitors from Pretoria were not friendly on the field and tackled the Wits boys throughout the game.  At one point two Wits players were down at the same time.

Wits were awarded a free kick and Lehlohonolo Makhutle’s spot kick sailed past the Tuks defence and into the net, giving the home team the lead once more.

The visitors were nearly punished by Wits when their defenderClaudio Barreiro made a clumsy clearance.

Tuks’s rough play was finally punished when captain Swartz was given a yellow card.

Wits goalie Ricardo De Ceccio was hard at work in the second half and was saved in the 75th minute when Tuks substitute Mosa Sesele’s powerful shot hit the top post.

Wits substitute Onke Thamane sealed the three points for the hosts with a beauty of a goal in the last minutes of the game.

But Wits`s great run in the match was dented by bad behaviour when substitute Nicholas Mynhardt was red carded for using abusive language at the referee.

Overall, Wits men`s coach Karabo Mogudi was pleased with his team`s performance ,saying they had expected Tuks to be more physical and athletic because of their high performance centre but that his team managed to  keep possession and punish the opposition where they needed to do so.

Wits will now play away to a difficult Vaal University of Technology team as they near the end of their USSA games.