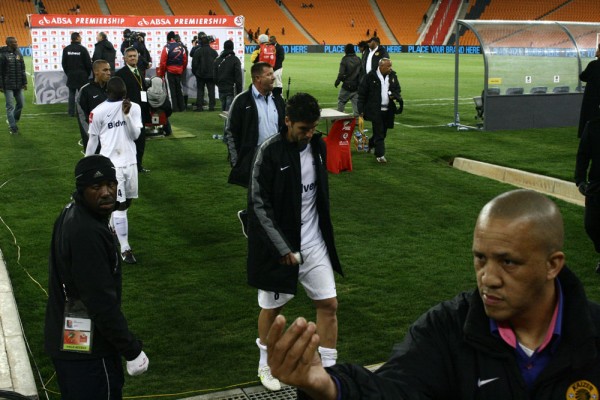 Dejected Bidvest Wits midfielder,Fabricio Rodrigues(centre),walks to the change rooms after the team lost to Chiefs on Wednesday night.

THE CLEVER Boys failed to outsmart Kaizer Chiefs, suffering a repeat 2-1 loss with three points at stake, in a high-flying Absa Premiership encounter at FNB Stadium on Wednesday night.

The defeat came while Wits were still recovering from an MTN 8 quarter-final defeat at the hands of the mighty Amakhosi, at the same venue three weeks ago, with the same score-line.

The game got off to a rather slow start with both teams showing respect for each other in the opening minutes. As a result, the first 20 minutes saw minimal scoring opportunities created.

With home support behind them, Chiefs started opening the game up in the latter stages of the first half, with Siphiwe Tshabalala notably posing the biggest threat to the Wits defence on the right side. Tshabalala supplied two assists to Josta Dladla and Kaizer Motaung Jnr respectively to put Chiefs in the lead, but Wits keeper, Energy Murambadoro, pulled off good saves to keep the half-time score at 0-0.

Chiefs keeper Itumeleng Khune was also busy keeping out the Wits attack which was spearheaded by pacy wingers, Bongolwethu Jayiya and Sifiso Myeni, who had to be closely watched.

The attacking play by both teams was more exciting in the second half and it was Chiefs who broke the deadlock with a powerfully headed goal by Dladla, in the 53rd minute, from a Tshabalala cross.

Playmaker, Thando Mngomeni, was introduced into the game by coach Roger De Sa to add firepower to the Wits attack and the Clever Boys were rewarded with a 67th minute equaliser by Sibusiso Vilakazi, setting up the game for a grand finish.

Chiefs coach Vladimir Vermezovic was not to be outdone with substitutions and sent on striker Lehlohonolo Majoro, who scored within five minutes via a header from Dladla’s cross.

Wits continued to fight back but the resilient Chiefs backline held on strongly, coping with Wits’s threat. The final whistle meant Chiefs sailed to the top of the Premiership log with three wins from three games. Wits stand in ninth position with four points,  also from three games.