The global tobacco industry is on alert as US cigarette makers are forced to put disturbing graphic images on their packages.

From September next year US tobacco companies have to put graphic warning labels on their cigarette packages. The new mandatory warning labels will illustrate the worst possible effects of smoking, such as rotting teeth, blackened lungs and a dead body.

The decision by the American Food and Drug Administration has angered the tobacco industry, and the debate has now reached South Africa.

A news24 online poll revealed last week that 63% of voters feel it wouldn’t be unfair to ask tobacco groups to put graphic images on their cartons, because people need to know the facts.

Cigarette makers argue the decision is unconstitutional because it violates the right of free speech. They say advertisement for tobacco must be protected.

The regulation will force them to disseminate an anti-smoking message, urging potential consumers not to buy a lawful product.

They say the tobacco industry will then be acting on the government’s behalf, and this will give unlimited power to the government, which has already met its public health obligation with text warnings.

On the other hand, those who defend picture-based warnings say the protection of public health must prevail. The new labels will provide information about smoking risks in a way purchasers can easily understand. They will also be more likely to be noticed than text-only labels.

Those in favour of the regulation also say a commercial product doesn’t fall under the same category as a person with an unpopular opinion, so freedom of speech is not violated.

According to the World Health Organization on the Global Tobacco Epidemic 2011, 15% of the world population is covered by warning labels as a form of tobacco control policy.

For now the South African Tobacco Products Control Act of 1993 and its amendments state:

“No person shall sell or import for subsequent sale any prescribed tobacco product, unless… the package in which the tobacco product is sold bears the prescribed warning concerning the health hazards incidental to the smoking of tobacco products.” But legislation might get tougher. 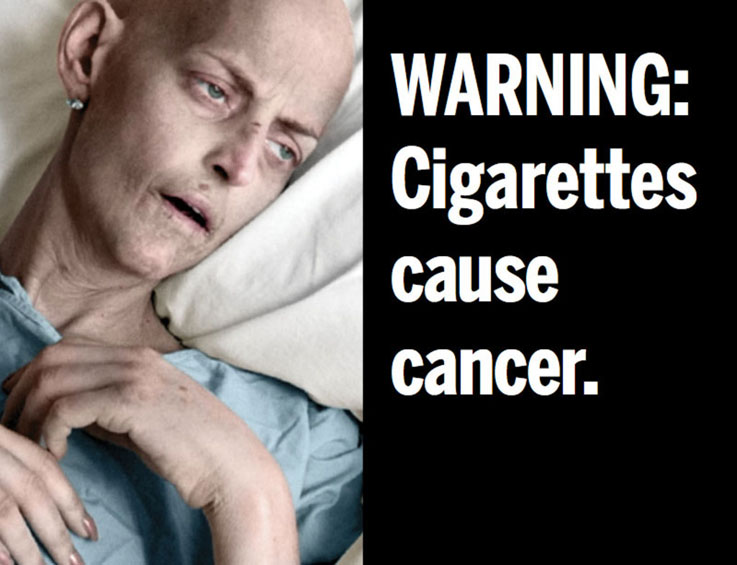 REALITY CHECK: Graphic images will be put on cigarette boxes in the US to show smoking's worst possible effects